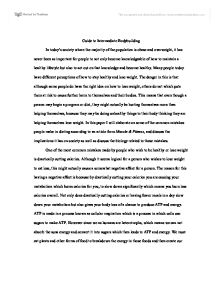 Guide to Intermediate Bodybuilding In today's society where the majority of the population is obese and overweight, it has never been as important for people to not only become knowledgeable of how to maintain a healthy lifestyle but also to act out on that knowledge and become healthy. Many people today have different perceptions of how to stay healthy and lose weight. The danger in this is that although some people do have the right idea on how to lose weight, others do not which puts them at risk to cause further harm to themselves and their bodies. This means that even though a person may begin a program or diet, they might actually be hurting themselves more than helping themselves, because they may be doing unhealthy things to their body thinking they are helping themselves lose weight. In this paper I will elaborate on some of the common mistakes people make in dieting according to an article form Muscle & Fitness, and discuss the implications it has on society as well as discuss the biology related to these mistakes. ...read more.

Although some people may think that because fat has twice the amount of calories as an equal amount of protein or carbohydrate, it is good for them to eliminate it from their diet, they are wrong. Similar to drastically cutting your calories, by completely eliminating fat from your diet you are once again slowing down your metabolism. This happens because when a person has no fat in their diet it lowers testosterone levels, which leads to metabolism also being lowered. Speaking about fat biologically, we can describe that there are two types of fats which include saturated and unsaturated fats. The difference between the two is that unsaturated fats have double bonds and are liquid at room temperature where as saturated fats do not have double bonds and are solids at room temperature. Also, one of the functions of fat is for protection and insulation. Although this might have a greater affect on people who live in cold climates, it still has an affect on everyone even if it is small. Take for example if a person was outside in the cold, one who had no fat or barely any would be much colder than another person who had some body fat. ...read more.

Lactic acid fermentation occurs in muscle cells when they cannot get enough oxygen. This causes a decrease of oxygen to certain muscles in the body. Because of this decrease of oxygen it causes the muscles to feel sore and to tire out. Some people believe that once a person has begun to feel lactic acid building up in their muscles, that they should stop exercising because it is only a matter of time before their muscles build up enough lactic acid forcing them to stop. Although it makes sense for people to stop exercising once they feel the lactic acid build up because their muscles will give out anyway. It is this struggle or perseverance to exercise when your muscles feel tired that makes the muscles stronger and able to withstand more. During this process muscle cells convert glucose or glycogen into lactic acid, which is then used as a fuel by the mitochondria. This means that when people work beyond the point of lactic acid fermentation, it increases the mass of their muscle mitochondria. In the end this allows people to burn more lactic acid and allows the muscles to work harder and longer. ...read more.