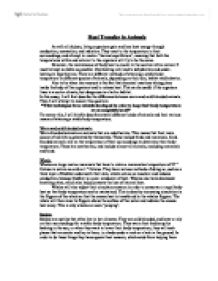 Heat Transfer in Animals As with all objects, living organisms gain and lose heat energy through conduction, convection, and radiation. They react to the temperature in their surroundings, and attempt to reach a 'thermal equilibrium', meaning that both the temperatures within and exterior to the organism will try to be the same. However, the maintenance of body heat is crucial to the survival of an animal. It must be kept as stable as possible. Overheating will lead to dehydration and under-heating to hypothermia. There are different methods of attaining a stable body temperature in different species of animals, depending on their diet, habitat and behavior. Also to be taken into account is the fact that chemical reactions taking place inside the body of the organism tend to release heat. This can be useful if the organism lives in a cooler climate, but dangerous in a hotter habitat. In this essay, I will first describe the difference between warm and cold-blooded animals. ...read more.

Snakes: Snakes are reptiles that often live in hot climates. They are cold-blooded, and have to rely on their surroundings for a stable body temperature. They warm their bodies up by basking in the sun, or when they want to lower their body temperature, they will seek places that are cooler and lay in them, i.e. shade under a rock or a hole in the ground. In order to do these things they have special heat sensors, which aside from helping them hunt, also assists them in the search for a place which will help them reach their desired temperature. Color can also play a role in the thermoregulation of a snake. Because lighter colors are poorer absorbers of heat, a snake living in a hot climate will often have a lighter color, to minimize heat absorbed through radiation. Birds: Birds are feathered animals that fly. They can live in a variety of different habitats, but they all generally use the same methods of conserving a steady body temperature. ...read more.

In cold surroundings, humans, like birds will also develop goosebumps. These, however are slightly less effective, seeing as humans have much less body hair in which to trap air. Fat stored in the body of a human also serves as a way to contain warmth, much as blubber in a whale, although warmth is not the primary function of fat, as it is more for storage of excess glucose attained by over-consumption. The human will also rub its hands or other body parts together, creating friction, which warms those parts of the body up temporarily. Engaging in exercise in the cold will warm the muscles of the human up. In addition to that, wearing more clothes helps immensely because the clothes act as an insulator. Wearing a hat helps cut down heat lost through the head by convection. In order to lose warmth, humans will perspire, releasing water from their body onto their skin through sweat glands. The water will then be evaporated, taking the heat from the surface of the skin with it. ...read more.