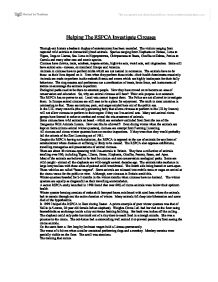 Helping The RSPCA Investigate Circuses Through-out history a barbaric display of entertainment has been recorded. The victims ranging from captured wild animals to domestically bred animals. Species ranging from Elephants to Horses, Lions to Tigers, Dogs to Llamas, Sea Lions to Hippopotomus, Chimpanzees to Bears, Giraffes to Zebras, Ponies to Camels and many other rare and exotic species. Circuses have clowns, tents, acrobats, trapeze artists, highwire acts, weird acts, and ringmasters. Some still have animal acts - moreso, on mainland Europe and America. Animals in circuses have to perform tricks which are not natural in occurance. The animals have to do these as their lives depend on it. Even when they perform these tricks - their health deteriorates massively. Animals are made to perform inside makeshift tents and rooms which are highly inadequate for their daily behaviour. The ring masters and performers use a combination of treats, brute force, and instruments of torture to encourage the animals to perform. Zoological parks used to be there to entertain people. Now they have moved on to become an area of conservation and education. So, why are animal circuses still here? Their sole purpose is to entertain. The RSPCA has no power to act. Local vets cannot inspect them. ...read more.

A secret RSPCA study launched in 1998 found that over 80% of circus animals were below their optinum health. Winter quarter housing consists of make-shift farmyard barns reinforced with steel bars where the animals had to remain through-out the entire duration of winter. Many animals fell deep into hibernation and some died of the hypothermia. In 1999 I helped the RSPCA in Kent during Easter. A prime example of poor winter quarters was that of Nellie (a 5-tonne, 20 year old female Indian elephant). Weights Circus Ltd. had her tied to the floor using breezeblocks as anchorage inside a tiny out-house farming building. Her back was inches off the ceiling . The elephant could only poke her trunk out of a tiny door to reach food in a trough outside. She was a prisoner to the circus. The out-house had a surrounding wall around it to prevent passers by from seeing the circus animals. On the same farm a 10m long by 2m beast wagon held a Lioness permanently. The worst of it hit me when a trailer contained performing dogs and a monkey. Monkey remains were partially visible on the floor. The smell was atrocious. The training that occurs The tools of the trade involve: bullhook spears - a sharp stick with a hook on the end; whips; muzzles; sticks; and chains. ...read more.

They attract people who cannot distinguish between right and wrong attitudes to animals. Only recently have people been exposed to a wider knowledge of animals via media like television programmes, books, videos, and in education at schools or colleges. Circues occur because of those who want them and support them. The key attribution to circuses is generally money. Greed, ignorance and gluttony through selfishness keep circuses open. Circuses operate across a widerange of Europe, Russia, USA, Africa, South America, and Asia. In some places they are more highly accepted than in other places. This is due to the lack of education about respecting animals and their captive keeping. There are several ways to end animal crulety in circuses. By not going circuses will close. No custom for circuses would mean no finances and eventually no business for circuses. The problem there being that the animals would suffer massively. The animals could not be rehomed easily. Limited zoological garden spaces and rehabilitation possibilties being low due to the animals health and behavioural problems. The general public by petition and organizations such as W.W.F., P.E.T.A., can protest to persuade Governments, the Euopean Union, and other large countries to boycott animal circuses by creating new laws. There is no conservation, education, or scientific benefit in animal circuses to either people or animals. As Jan Cremer (director of the internationally known Animal Defenders) said: " Circuses exist because of the demand. Cut the demand and end the cruelty. ...read more.