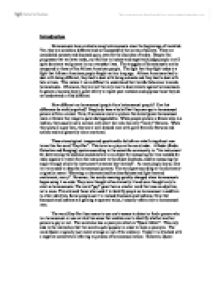 Introduction Homosexuals have existed among heterosexuals since the beginnings of mankind. Yet, they are somehow different and not accepted by the norms of society. They are considered outcasts and shunned upon; even by the churches of today. Despite the progresses that we have made, our abilities to outcast and negatively judge people is still quite dominant and present in our everyday lives. The struggles of homosexuals can be compared to those of the African American people. The fight that they fight today is a fight that African American people fought not too long ago. African Americans had to deal with being different, they had to deal with being outcasts and they had to deal with hate crimes. This makes it more difficult to understand their hateful behaviour towards homosexuals. Of course, they are not the only race to discriminate against homosexuals. In general, humans have a great ability to repeat past mistakes and oppress those they do not understand or find different. How different are h********l people from heterosexual people? Can this difference be visibly spotted? People do have a belief that they can spot a h********l person within a crowd. Now, if someone were to picture the stereotypical h********l male or female the image is quite distinguishable. When people picture a female who is a lesbian, they usually see a woman with short hair who has very "manly" features. When they picture a gay man, they see a well dressed man with quite feminine features and actions and are generally more emotional. These stereotypical images and questionable beliefs are what bring about new terms like the word "Gay-Dar". This term is a play on the word radar. A Radar (Radio Detection and Ranging) system according to the scientific community is: "An instrument for determining the distance and direction to an object by measuring the time needed for radio signals to travel from the instrument to the object and back, and by measuring the angle through which the instrument's antenna has traveled". ...read more.

However, there were some definite similarities. All the participants seem to place heavy emphasis on speech patterns and speech styles. They also seem to believe that homosexuals tend to have a "cleaner" appearance. Also during their experiments, the h********l participants seemed to fair better at spotting the h********l males than did the heterosexual participants. The h********l participants claimed that they had to train their Gay-Dar's in order to spot other homosexuals. Almost like a skill they use to find a partner; the better the skill the better their chance to find a partner. Some interesting facts were also mentioned about celebrities that have been "in the closet" for years and have managed to fool the general public. Astonishing people when they finally decided to "come out of the closet". This only goes to show that the Gay-Dar is definitely not perfect. Nonetheless, in their experiment, the participants were able to spot 60% of the homosexuals. This is a better than chance result and so, Michael Bailey claims that the Gay-Dar definitely exists and that further research must be done to understanding this behaviour. Michael Bailey also makes claims that in his other experiments, he has consistently attained results of approximately 70% of the participants positively identifying the h********l males. Then again, the details to his experiment are not available. Although, given the fact that he is a university professor is a good indication of the fact that his experiments are conducted properly. On the most part, the results of this experiment agree with the results of the survey that was done. This is a good indicator that the results attained from the survey do represent the general public and make it easier to make an assessment based on these results. Discussion of relevant cognitive factors The three cognitive factors that are most relevant to this essay are the following: The tendency to seek confirmatory information, the problem of hidden or absent data, and focused and unfocused expectations. ...read more.

In fact, the emphasis should not be place on the person that is making the assumption, but strictly on the person being accused. The argument being presented here is quite simple. Everyone would agree that if someone smiled and they were genuinely happy, it would be easy to spot. Whether that person was black, white, brown or purple, male or female, the smile on their face would be a good indication of their emotion. There are also people who wear a "fake" smile on their faces to fool others. Sometimes this can be spotted, but often it is unnoticed. Humans are naturally able to portray a self image by simply using their body language and expressions. Therefore, could it not be possible that the h********l males that are easy to spot, want to be spotted? Why is it that big time celebrities are able to fool millions of people for years? The fact is that people will show an image of themselves that they want others to see. This could explain why h********l males alter their physical appearances and speech patterns to convey their s****l preferences. Why h********l females choose to cut their hair short and act "manly". Homosexuals might find it difficult to find partners and thus choose to alter their appearances and actions to make it easier to find a mate. It all comes down to the fact that if a person who is a h********l wanted to hide the fact that they were h********l, there is a chance that no one would ever know. There is also a chance that someone would catch on, but the same can be said for a person who is smiling on the inside but sad on the outside. Given these points it is quite reasonable to hypothesize that the Gay-Dar is no special ability or intuitive tool that is always correct. It is simply an observation that people make based on stereotypes that they have come to believe. So, maybe the Gay-Dar does exist in some sense, but quintessentially it is just people observing that which is obvious. ...read more.