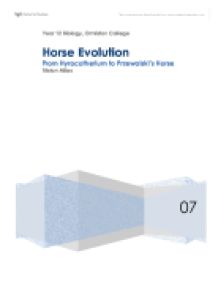 Horse Evolution The horse family is a classic example of evolution and is supported by extensive fossil evidence. It has been comprehensively studied to form possibly the most complete evolution of any animal after humans. Horses are believed to have first appeared around 55 million years ago in the form of the Hyracotherium, or 'hyrax-like beast' (The World Book Encyclopedia). They originally inhabited North America and Europe, where the oldest fossils of possible ancestors were found (Encyclop�dia Britannica, 2007). The Przewalski's Horse, Equus ferus przewalskii or Equus caballus przewalskii, belongs to the family Equidae in the order Perissodactyla, which means odd-toed ungulates (Wikipedia, 2007). Animals in this order all have hoofed feet with an odd number of toes, mobile upper lips and similar tooth structure. Other animal families in this order are tapirs and rhinoceroses. In the evolution of the horse, the change of the teeth, toes, legs and overall shape of the body are of particular significance. These characteristics evolved as adaptations to changes in their environment and the progress from a smaller minor species to one of the largest species today. The equids diet began to change from foliage to grasses when grasses first began to flourish, causing the equids to have larger and more durable teeth. Equids also became further under threat from predators as new species evolved, leading them to be capable of greater speeds. Equids adapted by lengthening their limbs and shifting the weight of the body to the third toe, the longest of the toes. ...read more.

They lived in North America and had a long skull with a facial structure similar to that of modern horses (Tufts University, 2007). Its third toe was still the strongest and largest, carrying the weight of the animal. The four premolars resembled the molars, though were relatively small. The incisors had crowns with some having a shallow depression. Approximately 17 million years ago, the Merychippus evolved from the Parahippus. It had wider molars believed to be used for crunching harder grasses (Draper, J. 1999). It grew to around 100 cm tall and was a grass eater, not a leaf eater, as it completed the transition from living in forests to grassy plains. The hind legs were relatively short and the two side toes had very small hooves that probably only touched the ground when running (Florida Museum of Natural History, 2007). The legs became more rigid and more effective at carrying weight as equids evolved into a larger animal. The Merychippus descended into three equids: the Hipparion, Protohippus and Pliohippus. The Pliohippus evolved around 15 million years ago and is believed to be the ancestor of modern horses. It retained the two extra toes on both sides of the hoof, thought to have been barely visible externally. It had a deep facial fossa similar to that of the Mesohippus (Critters-2-Go, 2007). Thirteen million years ago, the Dinohippus evolved from the Merychippus and was the most common horse of its time. ...read more.