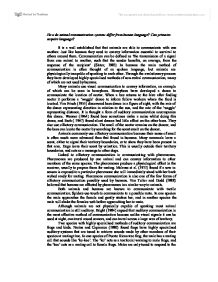 How do animal communication systems differ from human language? Can primates acquire language?

How do animal communication systems differ from human language? Can primates acquire language? It is a well established fact that animals are able to communicate with one another. Just like humans they need to convey information essential to survival to others around them. Communication can be defined as 'the transmission of a signal from one animal to another, such that the sender benefits, on average, from the response of the recipient' (Slater, 1983) In humans the main method of communication is often thought of as spoken language, but animals are physiologically incapable of speaking to each other. Through the evolutionary process they have developed highly specialised methods of non-verbal communication, many of which are not used by humans. Many animals use visual communication to convey information, an example of which can be seen in honeybees. Honeybees have developed a dance to communicate the location of nectar. When a bee returns to the hive after finding nectar it performs a 'waggle' dance to inform fellow workers where the food is located. Van Frisch (1955) discovered bees dance in a figure of eight, with the axis of the dance representing direction in relation to the sun, and the rate of the 'waggle' representing distance. It is thought a form of auditory communication accompanies this dance. Wenner (1964) found bees sometimes make a noise whilst doing this dance, and Esch ( 1967) ...read more.

Dolphins also communicate distress in the form of whistling. Bright (1984) recorded noises made by a dolphin that had been captured, and when this was played to its school they all fled with fear. However, when this was played to an unfamiliar school they acted with curiosity. This suggests the communication system used by dolphins is not universal, and different languages may have developed between schools. Animals within a species appear to be able to communicate meaning to one another, but whether they actually use 'words' is debateable. We have already established that they do not have words as in a spoken language, but it is a possibility that they may have specific conceptual signals within their communication systems. Seyfarth and Cheyney (1980) did an experiment with African vervet monkeys to investigate this idea. From observation they found that different predators made the monkeys produce different sounds. They will chirp if they see a leopard or lion, and chutter if they see a snake. When a tape of these responses was played to another vervet they seemed to respond to the specific danger, for example standing on their hind legs if they suspected a snake was present. However, this experiment leads us to question intentionality. It is possible that the sounds played by these monkeys just indicated its level of fear. The vervets may have been unintentionally communicating their fear to others. ...read more.

He was taught Yerkish using a computer keyboard. The keyboard contained abstract symbols instead of letters and he was taught to communicate by pressing the corresponding keys. He learnt 50 symbols in just 18 months, and was also able to combine symbols in the correct word order. An example of this was 'hide peanut' instead of 'peanut hide'. By the end of the experiment he could respond to spoken commands, and also attempted to teach the other primates in his enclosure. Kanzi had obviously learnt some basic grammatical rules relating to word order, and had learnt many more words that was previously expected of him. Although the symbols he learnt were limited, he clearly understood the meaning of them. Considering he was only being taught for 18 months, I think these findings are remarkable because it can take a human child a few years to learn correct word sequencing. Also primates have not evolved to use human language, so it is not an innate ability. Human and animal communication systems clearly have their differences, but also their similarities. Both humans and animals communicate with visual, auditory, tactile and olfactory communication, but in very different ways. The main difference is that humans have their own language. However, animal communication systems are highly specialised to their functions, and they appear to be able to communicate just as effectively without spoken language. I strongly believe that animals such as dolphins, vervets and birds may in fact have their own language, and that this field requires further research to investigate this. ...read more.