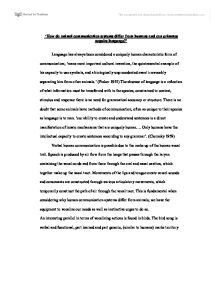 'How do animal communication systems differ from humans and can primates acquire language?'

'How do animal communication systems differ from humans and can primates acquire language?' Language has always been considered a uniquely human characteristic form of communication; 'mans most important cultural invention, the quintessential example of his capacity to use symbols, and a biologically unprecedented event irrevocably separating him from other animals.' (Pinker 1955) The absence of language is a reflection of what information must be transferred with in the species; constrained to context, stimulus and response there is no need for grammatical accuracy or structure. There is no doubt that some animals have methods of communication; often as unique to their species as language is to man. 'our ability to create and understand sentences is a direct manifestation of innate mechanisms that are uniquely human.... Only humans have the intellectual capacity to create sentences according to any grammar'. (Chomsky 1959) Verbal human communication is possible due to the make up of the human vocal trait. Speech is produced by air flow from the lungs that passes through the larynx containing the vocal cords and from there through the oral and nasal cavities, which together make up the nasal tract. Movements of the lips and tongue create vowel sounds and consonants are constructed through various articulatory movements, which temporarily construct the path of air through the vocal tract. This is fundamental when considering why human communication systems differ from animals; we have the equipment to vocalize our needs as well as instinctive urges to do so. ...read more.

The relative poverty of this communication system is not a barrier to communication. There is no struggle to express thoughts or desire, it is simply that all animals other than humans are widely considered to be confined to communication regarding stimulus, context and response. The amount of communication within a species varies inevitably depending on the day to day stimulus faced as well as years of natural evolution and intelligence levels. One can assume that the apes would be one of the most communicative of species as they are intelligent and easily comparable to humans in terms of evolution. Apes are the closest species of animal biologically to man and of the apes the chimpanzee is the most congruous although their evolutionary paths diverged some fourteen million years ago. In fact, the chimp is more closely related to man than monkey. A combination of the genetic similarities and the chimpanzee's ability to form attachments to human foster parents has meant it has been possible to compare clearly the progress of a human baby with a chimpanzee baby of the same age in terms of learning to speak coherently; for years people have been grappling with the question, 'can primates acquire language'. Although entirely consistent of stimulus and response; Primate call systems demonstrate that primates do have the ability to vocalize different dangers apparent to them. For example, Vervet monkeys will 'chutter' if they see a puff adder of cobra, 'rraup' if an eagle is visible; 'chirp' if a lion or leopard is present and 'uh!' ...read more.

Although it is almost impossible to prove that any degree of fluency or grasp of word order has been achieved, there has definitely been unexpected success in terms of attempts to teach elements of language to chimpanzees. A change in teqnique from human language to a gestural method of communication has allowed us to tap into the minds of chimps where it has not previously been possible. Washoe was forced to spend a couple of weeks in a zoo; for the first few days she was furious and swore constantly at the man who cleaned her cage twice a day. The gesture of rubbing the top of the hand on the underside of the chin means dirty, ie swearing. Washoe was upset at being down graded from the position of human to animal. There have recently been attempts to foster the use of human language in a colony of chimps. Projects such as these are becoming easier as we have reassessed teaching and communicative methods. At the moment, primates cannot be considered to acquire language fluently but at least with some degree of comprehension and application. In the future we may be forced to reassess the assumption that language is unique to humans and that constraints previously assumed to be mental may actually be motor and therefore avoidable 'in our social relations, the race is not to the swift but to the verbal-the spellbinding orator, the silver tongued seducer, the persuasive child who wins the battle of wills against a brawnier parent' (Pinker, 1994). ...read more.