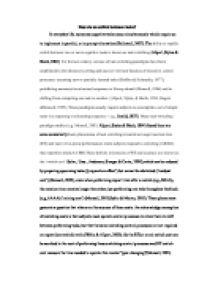 How do we switch between tasks? In everyday life, numerous cognitive tasks occur simultaneously which require us to implement in parallel, or in prompt alternation (Hallowell, 2007).

How do we switch between tasks? In everyday life, numerous cognitive tasks occur simultaneously which require us to implement in parallel, or in prompt alternation (Hallowell, 2007). The ability to rapidly switch between two or more cognitive tasks is known as task switching (Allport, Styles & Hsieh, 1994). For the last century, various of task switching paradigms have been established in the laboratory setting and uncover relevant function of executive control processes: executing new or partially learned tasks (Shiffrin & Schneider, 1977), prohibiting unwanted overlearned responses to Stroop stimuli (Monsell, 1996) and in shifting from competing one task to another ( Allport, Styles, & Hseih, 1994; Rogers &Monsell, 1995); These paradigms usually require subjects to accomplish a set of simple tasks in a repeating or alternating sequence(e.g., Jersild, 1927). Many task-switching paradigm studies (e.g. Monsell, 2003; Allport, Styles & Hsieh, 1994) found there are some consistently basic phenomena of task switching revealed as longer reaction time (RT) and more error-prone performances when subjects respond to switching (AB/BA) than repetition trials(AA/BB).These deficits in latencies of RT and accuracy are known as the 'switch cost' (Sohn , Ursu , Anderson, Stenger & Carter, 2000),which can be reduced by preparing upcoming tasks ('preparation effect') but cannot be abolished ('residual cost') ...read more.

It is widely considered that disparity between colour word and its display colour, the colour words naming interfere much less than the display colour naming (van Maanen, van Rijn & Borst, 2009). So word naming task is more proficient which possesses 'stronger' task-set (Cohen et al, 1990; as cited in Monsell, 2003), and the result suggests that switching to the stronger task increasing the switch cost. This asymmetric switch cost is also found in language Stroop study (Meuter & Allport, 1999), subjects were asked to name Number either using second language or mother language. The RT switch cost is increased when switching to a task of using second language to name numbers, compared with switching to a task of using mother language to name numbers (1999). The easier shift in less familiar task is showed. These findings raise a question to TSR model that why it requires extended time to reconfigure for the more practised task? Although the theory provides explanation of switch cost in studies with congruent stimuli (Rogers & Monsell, 1995), it does not account for incongruent switch cost but the TSI theory do. It proposes that subjects must conduct additional inhibition to the practised task-set in order to implement the unskillful task (Allport & Wylie, 2000). ...read more.

The positivity wave in switching task reflects the processes for rules set up and activation during preparation, whereas the negativity wave reflects the inhibition of carryover effect or irrelevant interference. So the result illustrated that the TSR and TSP processes performed in the CSI and RSI respectively. Limitation & conclusion In conclude, this essay suggests that the three types of processes (TSR, TSI&TSP) are all contributing to the magnitude of switch costs. Each theory can partially explains the switch costs, but the integrated processes which includes all three types of processes seems to better account for the behavioural effects of task switching (e.g., asymmetric switch cost). The experimental evidences were provided to support that one process is not enough to clarify the mechanism of task switching. Then the neuroimage studies were presented to indicate the active regions of operating TSR and TSI processes. However, the active region of the TSP is unknown. The neuroinage evidence also located the performing intervals of the TSR and TSP processes. The further studies in neuroimaging are required to discover more active regions of task switching processes, so the how physically behavour of brain when implementing switching will be clear. Furthermore, the studies in locating the task switching processes to corresponding interval are also demanded. Importantly, even combined three task-switching processes, the residual cost still remains (Koch,2001), other contributors of switch cost require exploring. ...read more.