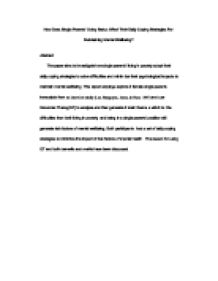 How Does Single Parents' Living Status Affect Their Daily Coping Strategies For Maintaining Mental Wellbeing? Abstract The paper aims to investigate how single parents' living in poverty adopt their daily coping strategies to solve difficulties and minimize their psychological impacts to maintain mental wellbeing. This report employs explore 2 female single parents transcripts from an interview study (Lea, Burgoyne, Jones, & Beer, 1997) and use Grounded Theory(GT) to analyze and then generate 2 main themes which is: the difficulties from both living in poverty and being in a single parents' position will generate risk factors of mental wellbeing; Both participants had a set of daily coping strategies to minimize the impact of risk factors of mental health. The reason for using GT and both demerits and merits have been discussed. Introduction Qualitative approaches are employed in order to acquire an comprehension of underlying motivations and reasons, to bring insights to obscure problems for developing testable theories; facilitating to gather in depth understanding of how people make sense of their experiences, lives and their structures of the world . qualitative are different from quantitative approaches, they do not involve statistic or measurement but nonnumeric context or representation. Qualitative approaches cover a wide range of methods, including Content analysis (quantitative and qualitative),Discourse Analysis ,Thematic Analysis, Interpretive Phenomenological Analysis (IPA),Grounded Theory(GT) and Ethnography( Yoshikawa, Weisner, Kalil & Way, 2008). Grounded theory is a useful tool of qualitative researches which "uses a systematized set of procedures to develop and inductively derive grounded theory about a phenomenon"(Corbin & Strauss, 1990, p24).It emphasizes on the way of establishing a theory from qualitative data that can account for much of observable behaviors instead of collecting the accurate 'facts' from a representative sample to fit into a testing theories and examine a pro-existing theory. Unlike quantitative approaches and some other types of qualitative methods, the collection of data is used to verify the emerging concepts and relationships that are generated from the original analysis. ...read more.

which is a risk factor of mental health. Difficulties of being single parents also engendered risk factors of mental health which made their life much tougher. Both felt under pressure to buy new belongings for their children. For example, FSP1 would have "to manage on spuds for a week or something like that or bread" (FSP1, L 49) in order to buy winter coat for her daughter. Similarly, FSP4 claimed that "you can't go and buy the kids a pair of shoes without really worrying about it" (FSP4, L25). They both found raising children was not easy, not just for buying essentials for the children but also the costs for illness and schooling in the future "You know the school holidays and that type of thing you have got to worry about and when they are ill...It is a difficult situation" (FSP4, L101); therefore they both saw their future as bleak. Both showed negative attitudes about the future with children, FSP1 saw her future would be worse off because of a drop in income by stopping sickness benefit, and she worried her daughter "going without quite a lot" (FSP1, L89). While FSP4 saw future like a path of stress and difficulties because of being single parent "single parents are the cause of everything" (FSP4, L109); these financial pressure from present life and future worries pose a heavy strain on them and increase anxiety (risk factor). Both felt their ex-partners were irresponsible for having children and passing most of their duties on to them, both need to shoulder responsibility to look after their children (mother's duty), they are always in a dilemma about going out to work but failing in their roles as a mother versus looking after the children but being no better off financially. Both worry about the reliability of childcare "you have got to worry about if that babysitter is OK" (FSP1, L20); and while they had to pay for childcare "by the time I have paid for somebody to look after her, I ain't gaining anything by doing it" (FSP1, L94). ...read more.

Moreover, a disengaged theory generation also engenders a risk for non-cumulative theory development. Several problems of using GT encountered are: it was unfocused with the data collecting before setting up the report question; GT requires researcher being open minded and forming concepts with her own knowledge, it raised a cultural issue which the data under the context of eastern culture would be interpreted differently. However, the data were the sample of the westerners who grow in western culture, interpretations may be biased. The results of GT are very subjective, not objective; these are personal perspectives and may difficult to accumulate knowledge but individual interpretation of study. Reference Cutrona, C. E. (1982). Transition to college: Loneliness and the process of social adjustment. In L. A. Peplau & D. Perlman (Eds.), Loneliness: A sourcebook of current theory, research and therapy (pp. 291-309). New York: Wiley. Cronholm S. & Goldkuhl G. (2003). Understanding the Practices of Action Research. In proceedings of the the 2nd European Conference on Research Methodology for Business and Management Studies (ECRM 2003). Mar 20-21, Reading University, Reading, UK. Corbin, J., & Strauss, A. (1990). Grounded theory research: Procedures, canons, and evaluative criteria. Qualitative Sociology, 13, 3-21. Fassinger, R. E. (2005). Paradigms, Praxis, Problems, and Promise: Grounded Theory in Counseling Psychology Research. Journal Of Counseling Psychology, 52(2), 156-166. doi:10.1037/0022-0167.52.2.156 Glaser, BG. & Strauss, AL. (1967). The Discovery of Grounded Theory: Strategies for Qualitative Research. New York: Aldine De Gruyter. Lea, S. E. G., Burgoyne, C. B., Jones, S. M., & Beer, A. J. (1997). An Interview Study of the Psychology of Poverty. XXII IAREP Conference, Valencia Pries-Heje, J (1992). Three barriers for continuing use of computer-based tools in IS development: A grounded theory approach. In: Scandinavian Journal of Information Systems. 1992, Volume 4: 119-136. Yoshikawa, H., Weisner, T.S., Kalil, A., Way, N. (2008). Mixing Qualitative and Quantitative Research in DevelopmentalScience: Uses and Methodological Choices. Developmental Psychology.44(2):344-354. Urquhart, C. (2001). An Encounter with Grounded Theory: Tackling the Practical and Philosophical Issues. In Trauth, E. (Ed.) Qualitative Research in Information Systems: Issues and Trends. Idea Group Publishing, London. ?? ?? ?? ?? ...read more.