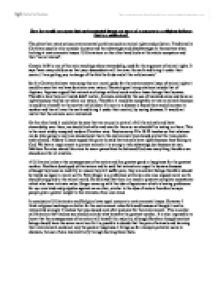 How far would you agree that environmental issues are more of a concern to a religious believer that to a utilitarian?

How far would you agree that environmental issues are more of a concern to a religious believer that to a utilitarian? The planet has many serious environmental problems such as animal rights and pollution. Traditionally Christians usually only consider humans and the advantages and disadvantages to themselves when looking at environmental issues. Utilitarianism on the other hand looks at the whole ecosystem and their 'moral interest'. Genesis 1v28 is one of the main teachings about stewardship, used for the argument of animal rights. It says 'have many children so that your descendants will live over the earth and bring it under their control. I am putting you in charge of the fish the birds and all the wild animals.' ...read more.

It would not matter that the animals were mistreated. On the other hand it could also be seen that we are put in control of all the animals and have stewardship over them, we should look after and care for them so we shouldn't be testing on them. This is the most widely accepted modern Christian view. Deuteronomy 20v 19-20 teaches us that whatever we do (like going to war) we should never harm the environment (we should protect the trees plants and animals). Andrew Linzey argued this point he said that animals have rights because they belong to God. We have a requirement to protect animals it is wrong to take advantage just because we can. ...read more.

In conclusion Utilitarianism and Religion have equal concern to environmental issues. However I think religious teachings are better for the environment when followed because although it can be interpreted wrongly it teaches that you should look after and care for the environment. This is unlike utilitarianism that teaches you should only do what benefits the greatest number. It is also impossible to know that the consequences of an action will benefit the majority, although Bentham thought sentient beings should have the same moral worth it is possible to decide that the pain of animals and harming their environment could out way the good or happiness it brings us for example potential cures to diseases, the use of cars and electricity through burning fossil fuels. ...read more.