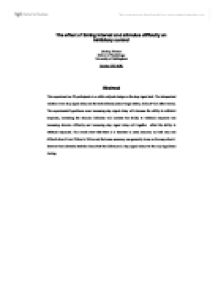 How to Write a Laboratory Report Using MS Word 2000

The effect of timing interval and stimulus difficulty on inhibitory control Lindsey Thomas School of Psychology University of Nottingham Course: C82 MHC Abstract This experiment ran 20 participants in a within subjects design on the stop signal task. The independent variables were stop signal delay and the task difficulty (easy=single letters, difficult=five letter words). The experimental hypotheses were increasing stop signal delay will decrease the ability to withhold responses, increasing the stimulus difficulty will increase the ability to withhold responses and increasing stimulus difficulty and increasing stop signal delay will together affect the ability to withhold responses. The results show that there is a decrease in mean accuracy on both easy and difficult stimuli from 250ms to 550ms and that mean accuracy was generally lower on the easy stimuli. However the inferential statistics found that the difference in stop signal delay was the only significant finding. Introduction Inhibitory control is crucial to control actions and thoughts by preventing them when necessary e.g. when tasks are no longer relevant to the current goal. Both motor systems and cognitive systems require this ability e.g. stopping talking when interrupted, avoiding a falling object when walking a straight line. Inhibitory control can be linked to automatic behaviours and attention control. Logan & Cowen (1984) developed a theory to account for inhibition of thought and action. Control is performed by an executive system which forms intentions and give commands to a subordinate system, which performs the commands. One example of a command is the control of inhibition. This theory developed a 'Horse-Race' Model explaining inhibition. A stop signal starts a stopping process which 'races' with other thought processes already running. ...read more.

The independent variables were the stop signal delay and stimuli difficulty. The delay varied between 250ms, 350ms, 450ms and 550ms based on the means calculated in the timing test (see appendices). Stimuli difficulty varied between the easy condition (single letters) and the difficult condition (five letter words). The dependant variable was the percentage accuracy of performance in inhibiting the response to the changes in the independent variable, recorded by the computer. The experimental hypotheses were: 1) Increasing the stop signal delay will decrease the ability to withhold responses. 2) Increasing the stimulus difficulty will increase the ability to withhold responses. 3) Increasing stimulus difficulty and increasing the stop signal delay will together affect the ability to withhold responses. Materials & Apparatus The stimuli in the easy condition were the single letters 'A' and 'B'. The stop signal was the letter 'S'. The stimuli in the difficult condition were the five letters words 'bored' and 'plain'. The stop signals were the corresponding homophones 'board' and 'plane'. All the words or letters were white on a black background; of Arial font size 30 (see appendices). Subjects used a Samsung Sync Master 753DFX Personal Computer and keyboard to run the experiment. The experiment was created and performed on E-Studio Programme. Procedure The participants took part individually. The participants in their own time watched the computer screen and ran the experiment through E-Studio programme. The participants were shown standardised instructions on the screen of how to carry out the task for 1,000,000ms (see appendices) and asked if they understood what was being asked of them. Then the participants were shown standardised instructions relating to the block they would shortly be presented with either easy stimuli or difficult stimuli. ...read more.

they withhold their responses to see if a stop signal is presented before deciding, which would make the results less reliable as it would not be an accurate reflection of natural inhibition. Another strategy would be not to answer at all giving 100% accuracy on all of the stop signal trials. One way of avoiding the use of strategies is to use a tracking algorithm. This would change the stop signal delay as the experiment progressed, by monitoring participant's responses and changing the delay accordingly e.g. if the participant slows down when realising there is a stop signal, the algorithm would increase the delay. The results should be interpreted carefully due to the violations of the assumptions of ANOVA; therefore it is possible that the effects found are not correct. Perhaps in a replication of this study, the number of participants should be increased to reduce outliers which could possibly produce an effect that is more reliable and significant. Further expansion of this study could be to look at the effects of negative and positive motivation on inhibitory control. For example, Konrad et al (2000) found that rewards on the stop signal task, brought children with ADHD up to the performance level of normal controls. Or looking at the inhibition of control in motor skills e.g. avoiding a falling object when walking a straight line, rather than cognitive. Although this experiment did not provide any significant result for task difficulty, plenty of studies have been done to provide evidence for the factors affecting inhibition. Understanding inhibition would have great implications not only for the psychological field of automatic behaviours but for the general public. Understanding how or what makes us inhibit our responses could help understand and treat many disorders e.g. ADHD, Schizophrenia and frontal lobe dysfunction therefore continuing research into other factors to help explain the relationship is important and relevant. ...read more.