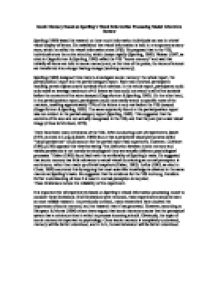 Iconic Memory Based on Sperling's Visual Information Processing Model Literature Review Sperling (1960) based his research on how much information individuals can see in a brief visual display of letters. He established that visual information is held in a temporary sensory store, which he called the visual information store (VIS). He proposed that in the VIS, individuals store the entire stimulus, which decays rapidly (Sperling, 1960). Neisser (1967, as cited in Gegenfurtner & Sperling, 1993) called the VIS "iconic memory" and said that initially all items are held in iconic memory and, at the time of the probe, the items of interest are transferred into a longer lasting storage (working memory). ...read more.

The same superiority found in the partial position report was not evident in the partial category report (Sperling, 1960). This suggested that the contents of the icon are not actually recognised in the VIS, and that they are just a raw visual image (Chow & Murdock, 1976). There have been many criticisms of the VIS. After conducting a set of experiments, Sakitt (1975, as cited in Long & Sakitt, 1980) found that a peripheral visual phenomena called "visual persistence" could account for the partial report task superiority. However, Coltheart (1980, p.210) opposed this view by stating "the distinction between iconic memory and visible persistence is not merely terminological: they are actually different psychological processes." ...read more.

He suggested that the evidence for the VIS is strong, therefore further understanding of how it is used in normal perception is required. These limitations reduce the reliability of the experiment. It is important for all experiments based on Sperling's visual information processing model to consider these limitations. If all limitations were removed, these experiments would be seen as more reliable research. As previously outlined, many researchers have doubted the importance of iconic memory, and the research that it has generated. However, according to Hampson & Morris (1996) others have argued that iconic memory ensures that the perceptual system has a minimum time in which to process incoming stimuli. Obviously, the topic of iconic memory is important to psychology. Once iconic memory is completely understood, memory will be better understood, and in turn, human behaviour will be better understood. ...read more.