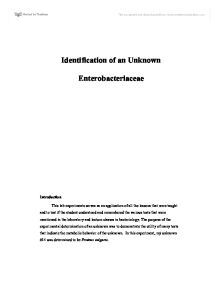 Identification of an Unknown Enterobacteriaceae. The purpose of the experimental determination of an unknown was to demonstrate the utility of many tests that indicate the metabolic behavior of the unknown.

Identification of an Unknown Enterobacteriaceae Introduction This lab experiments serves as an application of all the lessons that were taught and to test if the student understood and remembered the various tests that were mentioned in the laboratory and lecture classes in bacteriology. The purpose of the experimental determination of an unknown was to demonstrate the utility of many tests that indicate the metabolic behavior of the unknown. In this experiment, my unknown #14 was determined to be Proteus vulgaris. Proteus vulgaris is one of the most commonly isolated members of Proteus species. The genus Proteus is a member of a large gram negative bacilli family, Enterobacteriaceae. Proteus organisms are known to be one of those to cause serious infections in humans, along with Escherichia, Klebsiella, Enterobacter, and Serratia species. (Nester et al. 2008) The bacterium is a gram-negative rod with flagella. As a gram-negative rod, it has an extracytoplasmic outer membrane. It creates an endotoxin, which can cause a deadly systemic inflammatory response in 20 to 50 percent of its victims. It has been shown that its optimal growth temperature was at 37 C. P. ...read more.

Because indole is a component of tryptophan, the broth was converted to indole in the presence of the enzyme tryptophanase, which only some bacteria have. The presence of indole was tested for when the Kovac's reagent was added, which reacts with the indole and produces a red layer at the top of the tube. Sulfide test was used to test for the production of hydrogen sulfide from the domination of the amino acid cysteine, which contains a sulfur-sulfur bond. Some bacteria produce an enzyme called cysteine desulfurase which begins the initial reaction by the sulfur-sulfur bond in cysteine to H2S. This can only happen if the coenzyme pyridoxyl phosphate is present. A black precipitate will form where microbial growth is occuring; this black precipitate is FeS, where the sulfur and the iron of the deep have reacted. Motility was detected by growth away from the stab line of inoculation. A cloudy diffuse growth is positive for motility. (Alachi, P. 2007) The oxidase test consisted of testing for the presence of the enzyme cytochrome (indophenol) oxidase. A swab of the culture is taken from the plate and one to two drops of the oxidase reagent (tetramethyl-p-phenylenediamine) ...read more.

vulgaris is a common pathogen in hospital wound infections, especially in the immunosuppressed. (Gonzalez, G. 2004) Conversely, Proteus vulgaris is easily isolated from individuals in long-term care facilities and hospitals and from patients with underlying diseases or compromised immune systems. (Nester et al. 2008) But, while P. vulgaris does contribute to the Proteus infections, it is not the most likely candidate for community-bourn disease. However, P. vulgaris is the lead pathogen in causing hospital-bourn Proteus diseases. Unfortunately, it is not susceptible to ampicillins or cephalosporans. (Nester et al. 2008) The reason the urinary tract is such a hospitable environment for the colonization of the microbe includes the microbe's ability to degrade urea to ammonia with the enzyme urease. (Struble, et al., 2009) For treatment, the recommended empirical treatment includes an oral quinolone for 3 days or trimethoprim/sulfamethoxazole (TMP/SMZ) for 3 days for uncomplicated UTIs in women on an outpatient basis. Acute uncomplicated pyelonephritis in women can be treated with oral quinolones for 7-14 days, single-dose ceftriaxone or gentamicin followed by TMP/SMZ, or an oral cephalosporin or quinolone for 14 days as outpatient therapy. For hospitalized patients, therapy consists of quinolone, gentamicin (plus ampicillin), or aztreonam until defervescence. Then, an oral quinolone, cephalosporin, or TMP/SMZ for 14 days may be added to complete treatment. (Struble, et al. ...read more.