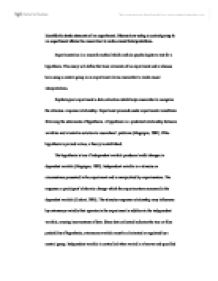 Identify the basic elements of an experiment. Discuss how using a control group in an experiment allows the researcher to make causal interpretations.

Since data collected indicates the true or false probability of hypothesis, extraneous variable must be eliminated or regulated by a control group. Independent variable is controlled when varied in a known and specified manner. Typically, participants are assigned to 2 groups: experimental group and control group by randomization. This balances conditions of the 2 groups, letting them approximately equivalent (Mcguigan, 1993). The experimental group exposed to experimental treatment whilst control group exposed to normal treatment. The difference between is the specific value of independent variable. Thus, effects of the experimental treatment are evaluated. A control group ensures consistence of stimulus characteristics so responses can carefully measured (Martin, 1996). ...read more.