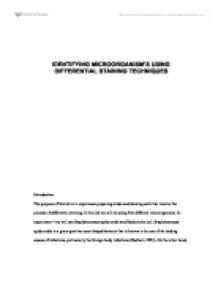 The purpose of this lab is to experience preparing slides and drawing cells that involve the process of differential staining. In this lab we will be using five different microorganisms. In experiment 4 we will use Staphylococcus epidermidis and Escherichia coli. Staphylococcus epidermidis is a gram-positive cocci shaped bacteria that is known to be one of the leading causes of infections, particularly the foreign body infections (Bukhari, 2004). On the other hand, Escherichia coli is a gram-negative rod shaped bacteria that is known to produce and grow in the intestines of animals and humans often from the ingestion of foods or water (Todar, 2008). In experiment 5 we will use Mycobacterium phlei. M. phlei is a gram-positive cocci shaped bacteria that is of the genus Mycobaterium (SteadyHealth.com, 2004). This type of bacteria is one of the hardest to destroy because of the mycolic acids that cover the cell bodies (SteadyHealth.com, 2004). Also, this bacteria is often the cause of human infections but people infected often respond well to anti-mycobacterial therapy (SteadyHealth.com, 2004). In experiment 6 we will use Bacillus megaterium and Clostridium sporogenes. Bacillus megaterium  is a gram-positive rod shaped bacteria that produces spores. This type of bacteria is one of the largest Eubacteria that is found in soil (Kunkel, 2009). Clostridium sporogenes is a gram-positive rod shaped bacteria that also produces spores. It is found often in soil as well as the intestines of animals and humans. This type of organism is often used to conduct studies involving low acid foods (Kunkel, 2007). In this lab we will explore three major types of differential staining techniques. These techniques are gram stain, acid-fast stain and the spore stain. All these staining techniques involve the use of multiple stains. The gram stain technique is used to distinguish between gram positive bacteria and gram negative bacteria of a particular cell (Kelleher, 2004). A primary stain called crystal violet is used first. Then a stain known as gram’s iodine is used as a mordant to fix the primary stain onto the cells (Kelleher, 2004). A de-colorizer stain known as ethyl alcohol is then used to distinguish between gram positive and gram negative cells (Kelleher, 2004). This stain removes the crystal violet colour from the gram negative cells turning them clear and traps the crystal violet colour in the gram positive cells (Kelleher, 2004). Finally, a stain known as safranin is used to stain the walls of the cell. The clear gram negative cells turn pink and the purple gram positive cells overpower the pink colour and remain the same (Kelleher, 2004). In the acid-fast staining technique the use of 3 stains is used instead of 4. A primary stain known as carbolfuchsin which is dark red is applied to the slide (Kelleher, 2004). With the help of heat and the phenol contained in the stain, the stain is able to penetrate the layer of mycolic acids that are present in the cell walls (Kelleher, 2004). Once this stain breaks through the acid from the cell wall a de-colorizer stain called acid-alcohol  is used to distinguish between acid-fast bacteria and non-acid-fast bacteria contained in the cell (Kelleher, 2004). Seeing that the acid-fast bacteria contain strong cell walls they will remain the same pink colour, while the non-acid-fast bacteria become clear because the acid from the decolorizer is able to remove the carbolfuchsin from the weak cell walls (Kelleher, 2004). Finally, a stain called methylene blue is used where the acid-fast cells remain pink and the non-acid-fast cells absorb the stain and turn blue-green (Kelleher, 2004). In the spore staining technique only 2  types of stains are used. A primary stain called malachite green is applied to slide. With the help of heating, the stain is able to enter the endospores and cooling traps the stain into the spores (Kelleher, 2004). The stain also enters the vegetative cells easily (Kelleher, 2004). Once this staining is complete the excess stain is washed off and this is when the endospores of the bacteria remain green, while the vegetative cells become clear (Kelleher, 2004). Lastly, a stain called safranin is applied to the slide to distinguish between endospores and vegetative cells of the bacteria (Kelleher, 2004). The endospores remain green and the vegetative cells become pink (Kelleher, 2004).

This lab was performed exactly as described in the Fall 2011 BIOL 140L lab manual by the Department of Biology without any deviations. The experiments involved in this lab were Experiment 4: The Gram Stain pages 24-27, Experiment 5: The Acid-Fast Stain pages 28-30 and Experiment 6: The Spore Stain pages 31-33.

Based on the results from the gram stain experiment it can be concluded that the two organisms tested are very different in terms of morphology and gram reaction. Staphylococcus epidermidis is an organism that contained gram-positive cells and the shape of these cells were round/coccus. On the other hand, Escherichia coli is an organism that contained gram-negative cells and the shape of these cells were rods/bacillus. Gram staining was particularly used for these two types of bacteria in order to differentiate between the many gram-positive and gram-negative cells within each organism. This staining provides a different colour for both gram-positive and gram-negative cells. Staphylococcus epidermidis was gram positive because the cell wall enclosing the cells are very thick containing high levels of peptidoglycan. This layer of peptidoglycan is rigid and thick and it protects the membrane and cytoplasm of the cell (Madigan, Martinko, Dunlap & Clark, 2009). Based on the results from the acid-fast stain experiment it can be concluded that Mycobacterium phlei contained gram-positive cells. Acid-Fast staining was chosen for M.phlei because the stains used in gram staining and spore staining don’t have the capability to penetrate the cell wall that is protected by the mycolic acids (Madigan, Martinko, Dunlap & Clark, 2009).  Based on the results from the Spore stain experiment it can be concluded that both Bacillus megaterium and Clostridium sporogenes were gram-positive. Spore staining is used for these type of bacteria because they contain endospores that act as protective cells from environmental conditions like heat and chemicals when vegetative cells are no longer able to grow (Madigan, Martinko, Dunlap & Clark, 2009). Possible sources of error occur during the staining of the slides. The exact time required to let stain fix onto the slide was not precise, therefore this may have caused slides to be unclear during examination under a microscope therefore distorting the image during magnification. The advantages of differential staining over simple staining is that different stains are used so that one can differentiate between different components of a single species of bacteria. The only disadvantage of differential staining is that the process of staining more than once is quite long and time consuming therefore one must be extra careful to follow certain time limits for staining, otherwise the slide may be difficult to see under a microscope. All of the staining techniques used for this lab are very useful in real world situations. Since many of these bacteria tested are causes of human infections and diseases, health care institutions use differential staining techniques quite often in the lab when they want to differentiate between certain types of organisms. Not only are staining techniques useful in health institutions, but also in labs that test food and water for bacteria. These labs make sure that food is safe and infection -free before going to the stores. They do this by testing for bacteria using these same staining techniques. Overall, this lab was successful in showing how differential staining techniques effect appearance of microorganisms under a microscope.

1. Discuss two difference between a simple and differential stain such as the Gram stain?

2. You will notice for Experiment 4, a 12-18 h culture was used. Explain why a young culture must be used for the Gram staining technique?

3. A student completed the Gram stain technique, but neglected to use the Gram’s iodine. Discussing the function of Gram’s iodine describe the final appearance or colour of the cells.

The chemical that is responsible for the acid-fast property of Mycobacteria is mycolic acids. Due to the high levels of mycolic acids present in the cell walls of Mycobacteria, ordinary stains are not sufficient in penetrating the walls. With the acid-fast procedure a stain called carbolfuchsin is used. This stain combined with high temperatures of heat are able to penetrate the cell walls of these types of bacteria easily. Once cells have been stained the use of a acid-alcohol decolorizing agent is not capable of decolorizing the cells as they remain the same. This property that they possess is why they are called acid-fast, in that the cells of the bacteria will hold its primary stain in the presence of an acid-alcohol agent.

5. Name two pathogenic acid-fast bacteria and the diseases they cause.

6. All three techniques for staining required that you heat-fixed the slide prior to staining. Give two reasons for heat-fixation. What would be the outcome if you heat-fixed too much?

7. Explain how endospores within the vegetative cells can be used to help differentiate a species of microoganism?

8. What is the function of an endospore and how does this relate to the age of the culture you used in the lab?

The function of an endospore is to protect certain bacteria from environmental influences such as extreme desiccation, high temperature, ionizing radiation, and other chemicals when it can not protect itself during its vegetative state. This relates to the age of the culture used in this lab because the age of the culture used was 48h. This means that in older cultures endospores become more available until there are suitable environmental conditions for vegetative growth.