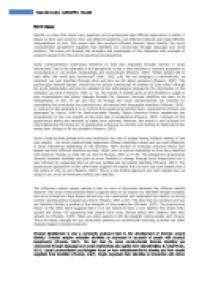 Identity is a topic that raises many questions and psychologists take different approaches to define it. Based on their own concerns; they ask different questions, use different methods and make different interpretations of data.

Part I: Essay Identity is a topic that raises many questions and psychologists take different approaches to define it. Based on their own concerns; they ask different questions, use different methods and make different interpretations of data. This means that they produce different theories about identity. The social constructionist perspective suggests that identities are constructed through language and social relations. This essay will illustrate the strengths and weaknesses of this statement with examples of research studies from this and the psychosocial perspective. Social constructionists understand identities as fluid and originated through nurture in social interactions. One of the strengths of this perspective is that it sees identities in constant adaptation to circumstances in our bodies, relationships and environment (Phoenix, 2007). "When people talk to each other, the world gets constructed" (Burr, 2003, p.8). We use language to communicate, we construct our own identities through what and how we tell about ourselves (Phoenix, 2007). The psychologist Kenneth Gergen. shows how he actively constructed his identity as "pen writer" through his social relationships and how he adapted to the technological changes by the introduction of the computer (as cited in Phoenix, 2007, p. 71). This fluidity of identity gives us the flexibility to adapt to new circumstances and allows changes thought life. However, because identities are seen as an interpretation of who we are and how we change, the social constructionists are criticized for considering that everybody has contradictory, de-centred and changeable identities (Phoenix, 2007). ...read more.

Social constructionist theories contrast also in this topic with psychosocial theories, which allow less space for adaptation though life. Erikson considered the final stage of his eight developmental stages as one where people had difficulties to find identity against the risk of despair caused by physical impairments (Phoenix, 2007). Another strength of social constructionist theories compared to psychosocial theory is that it takes into considerations the differences between types of disabilities and within people who have the same disabilities (Phoenix, 2007) As the Begums example shows, sometimes gender, race and impairment intersect and shows how people can have simultaneously different identities depending on who are they relating to (Phoenix, 2007). As this essay shows, the origin and definition of identity is a highly debated area. There is never one single answer to a particular question about identity. Both, the social construction and the psychosocial theory provide different views and ways of thinking about this topic. They both focus on different aspects of identity. There are areas where these perspectives coexist, complement or conflict with each other. Debates about if identities are fixed or fluid, multiple or single or the product of our genes or our physical, cultural and social environment will remain an area of discussion in the topic of identity. These debates help psychology progress and remain a vibrant discipline. Words: 999 References: Anastasiou, D., & Kauffman, J.M. ...read more.

No debriefing process took place to identify any unforeseen harm, discomfort or misconceptions and in order to arrange for assistance if needed. The researchers didn't consider the fact that some participants may be feeling upset or may not agree with the results. They were just sent home without further explanation. Words: 240 2 (b). To be more compliant with the current ethical standards the researchers should have obtained informed consent from the participants to give them the opportunity to understand the nature and purpose of the research, keeping adequate records of when, how and from whom consent was obtained. They should have also ensured the participants were aware of their right to withdraw at any time and informed them that they may decline to answer any question asked to them. The researcher should have treated the participants with more respect without insulting them. The researchers should have ensure the anonymity of the research and obtain consent for disclosure of confidential information. Considering that a certain level of deception is necessary to preserve the integrity of the research (a certain level of tension had to be generated to reproduce a real life situation and assess participants hostility), psychologists should have disclosed at the earliest feasible opportunity the nature of the deception, instead of sending the students home. The process of debriefing is missing and this is fundamental to answer questions, identify any harm caused and provide the participants with help if needed. Words: 187 ?? ?? ?? ?? ...read more.