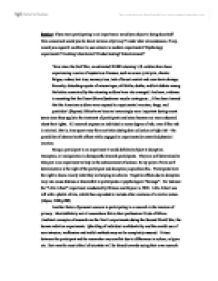 If you were participating in an experiment, would you object to being deceived? How concerned would you be about invasion of privacy? Under what circumstances, if any, would you regard it as ethical to use animals in medical experiments? Psychology

Subject: If you were participating in an experiment, would you object to being deceived? How concerned would you be about invasion of privacy? Under what circumstances, if any, would you regard it as ethical to use animals in medical experiments? Psychology experiments? Teaching laboratories? Product testing? Entertainment? 'Ever since the Gulf War, an estimated 20.000 returning U.S. soldiers have been experiencing a series of mysterious illnesses, such as severe joint pain, chronic fatigue, rashes, hair loss, memory loss, lack of bowel control and even brain damage. Recently, disturbing reports of miscarriages, stillbirths, deaths, and birt defects among the babies conceived by the returning soldiers have also emerged. And now, evidence is mounting that the Desert Storm Syndrome may be contagious....It has been learned that the American soldiers were exposed to experimental vaccines, drugs, and pesticides'.(Supress) Ethics have become increasingly more important during recent years since they apply to the treatment of participants and since humans are more educated about their rights. All research exposes an individual to some degree of risk, even if this risk is minimal, that is, time spent away from activities during data collection or high risk - the possibility of adverse health effects while engaged in experimentally controlled physical exertion. ...read more.

Although APA( American Psychology Association) developed a Code of Ethics which applies for the use of animals in research, personally I strongly object to any use(APA Code of Ethics, 2002). In the "Ethics of Animal Investigation" a document published by the Canadian Council on Animal Care the regulations for animal use mention that animals must not be subjected to unnecessary pain or distress(Bailey). Weren't Pavlov's experiment and other similar behavioral experiments causing distress to the dog which had to learn to modify their behavior in order to receive food? Didn't the time that took the dog to learn this behavior cause distress since it could not receive food otherwise?(Myers,2000,p290-292) Similarly, in medical experiments simple or complex, usually rats are used. Isn't the intake of medication against obesity causing distress and health risk to the rats? Humans may consider animals a lower form of life, but this does not give us the right to act against another form of life. If we put ourselves in their position would we be happy to be the guinea pigs in a laboratory, been observed by a stranger or been administered various substances? Deprived the right of freedom even if we were born in captivity, the right of health and of privacy? ...read more.

We are animals too, and since we have feelings, obviously other animals have feelings too. Zoos are also a kind of entertainment, which I object. But zoos can change this theme of entertainment. They can actually help animals that are endangered to reproduce and increase the number of their species. For instance when I visited last summer the Chicago Aquarium, the scientists there were working on the reproduction of the Beluca whales (white dolphin like whales), which are an endangered species. They also had a dolphin "show" during which dolphins naturally swim and their swimming behavior is explained to the public (e.g. itching their back because the skin got dry = flying high and falling into the water with their back). Animal tests, in any form, and their use in entertainment are wrong. Animals feel the pain and they show it with their behavior by screaming, struggling, attacking. Animals are like humans and should be considered as individuals and not just members of a species. The most basic right of an individual is to be treated with respect. Therefore, as it is wrong to experiment on people without their consent, it is also wrong to experiment on animals. Unless codes of conduct and ethical guidelines continue to be abided by, all psychological (and indeed scientific) research could fall prey to becoming invalid and useless in today's society. ...read more.