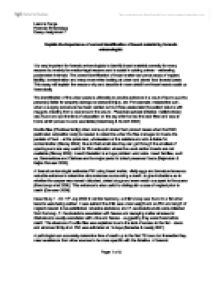 Explain the importance of correct identification of insect material by forensic entomologist.

It is very important for forensic entomologists to identify insect material correctly for many reasons but mainly for medico-legal reasons and to assist in solving crimes – estimating postmortem intervals. The correct identification of insect matter can prove cases of neglect, liability, contamination and many more when looking at urban and stored food insects/ pests. This essay will explain the reasons why and describe in more detail how these insects assist us forensically.

The identification of the urban pests is ultimately to provide evidence in a court of law to sue the person(s) liable for property damage or personal injury, etc. For example; malpractice suit – when a surgery procedure had been carried out but three weeks later the patient returns with maggots crawling from a cast around the wound. Phaenicia sericata (Diptera: Calliphoridae) was found and put the time of oviposition on the day after he had the cast fitted and was at home which proved no-one was liable(Greenberg & Kunich 2002).

Scuttle flies (Phoridae family) often come up in stored food product cases when the EOD (estimated oviposition date) is needed to determine when the flies managed to invade the packets of food – at the producers, wholesalers or the retailers and who is liable for contamination (Disney 2004). Due to their small size they can get through the smallest of openings and are very useful for PMI estimation where the usual carrion insects are not available (Disney 2005). Insect infestation is a huge problem word wide. Insect families, such as, Dermestidae and Cleridae are the major pests for dried/ preserved foods (Rajendran & Hajira Parveen 2005).

A forensic entomologist estimates PMI using insect matter, vitally eggs and immature larvae as valuable evidence to determine circumstances surrounding a death, to give indications as to whether the corpse was moved/ disturbed, detect drugs and even match a suspect to the scene (Mendonça et al 2008). This evidence is also useful to distinguish a case of neglect prior to death (Donovan 2006).

Case Study 1 - On 10th July 2000 in central Germany, a child’s body was found in a flat when tenants were being evicted. It was evident the child was under weight and so PMI and length of neglect needed to be established. Muscina stabulans, and F. canicularis adults were collected from the body, F. Canicularis is associated with faeces and decaying matter whereas M. Stabulans is usually associated with urine and faeces – suggesting they were there before death. The absence of Lucilia flies was explained due to the lack of access to the flat – doors and windows firmly shut. PMI was estimated at 14 days (Benecke & Lessig 2001).

A pathologist can accurately determine time of death up to the first 72 hours but thereafter they need assistance from other sources to be more specific with the timeline. A forensic entomologist uses the insect matter, which is data retrieved from the life cycle stages of the insect, to approximate the PMI (Gennard 2007).

Case Study 2 - On June 13th 2005 in Michigan, two bags were found floating in a river with bones and flesh inside. Two different species of larva caddisflies were found at pre-pupa stage and had silken mesh across the anterior indicating a dormant period prior to pupation. This determined that the corpse had been there at this time of year and that the body had to of been submersed before the dormant period while larva still active. PMSI was estimated at late April to late May. Timing of specific life cycle history of the caddisfly species was paramount to estimating PMSI (Wallace 2008).

There are many insects that are attracted to a corpse at different and sometimes overlapping times. At the start of decomposition period insects attracted can be: maggots and larva from Fannia anicularis (Diptera: Muscidae), F. scalaris, Phormia regina (Diptera: Calliphoridae), Lucilia family, Muscidae family, Piophila casei (Diptera: Piophilidae) & Staphylinid beetle are forensically important (Tsokos 2004).

Several differences within the carrion insect family affect an accurate PMI estimation. The growth rate, arrival time and most importantly the position within the order of succession all have an influence when estimating PMI. For example; certain species can give birth to live larva (Sarcophagidae) while others lay eggs (Calliphoridae) (Byrd 2001). If larva was found on a corpse that was incorrectly identified it could alter the PMI estimation significantly, making it look like the corpse had been there much longer.

Succession is a predictable process where different insects occupy the corpse at different stages of decomposition. Jerry Payne studied decomposition and recorded over 500 organisms that visited pig carcases during 6 stages of decomposition; his system is still used by most forensic entomologist today (Goff 2000). Insects are attracted to a corpse imminently after death, sometimes within minutes (Byrd & Castner 2000).

Megnin recorded 9 stages but Payne’s work, published in the journal ‘Ecology’ in 1965 only found six; fresh, bloated, active decay, advanced decay, dry, and remains. He discovered that insects had a huge impact on the time of decomposition and that different insects were attracted to the corpse at different stages of decomposition. Coleoptera, Diptera, Hymenoptera, and Araneida accounted for 78% of the carrion fauna whereas only two coleopterous families, Histeridae and Staphylinidae and three dipterous families, Sarcophagidae, Calliphoridae, and Muscidae, represented 26% of the fauna (Payne 1965).

Each family of insect has a specific ‘time of development’ from larva to adult. Once family is known the approximate age has to be determined to calculate the time since it was hatched. This is done using known data tables for that specific family (José 2008).

Case Study 3 - On May 10th 2005, an 8 month old boy was abducted from Macapá, Brazil and 42 days later a corpse, severely decomposed was found close to the house. Two larva of black soldier fly (Hermetia illucens) were found on the corpse and reared to determine approximate age for PMI estimation. It was determined that the larva was at the last stage of moulting before pupating. The results were compared to known data and PMI was estimated at 42 days which puts death of the child imminently after the abduction (José 2008).

The different stages of decay attract different insects. Adult pregnant flies prefer to deposit eggs in an orifice (Tsokos 2004). Studies have been carried out to test the time from landing on the corpse to laying their eggs, results have shown flies lay eggs from minutes to 48 hours after death (Bourela 2003 & Grassberger 2001).

When calculating the PMI it is vital the species is known to be able to work back and give an accurate estimation. During the stages of decomposition the necrophagous species are the first to arrive on a corpse, mainly blowfly and flesh flies. Beetles (Dermestidae and Cleridae) start to arrive after this when the corpse starts to dry out approx. 3-6 months later (Kulshrestha & Satpathy 2001). The necrophagous species attracts parasites (Hymenoptera family) and predators, such as Silphidae, Staphylinidae and the Histeridae. These beetles thrive on eggs and maggots of the Diptera that are already feeding on the corpse (Goff 2000).

The parasites usually attack a particular type of fly and they provide information as to which flies were on the corpse before the parasites arrived. Insects may be found on a corpse that are not related to decomposition which tell us about the environment at the time the corpse arrived. The surrounding soil near a corpse can advise if it is nutrient rich, which can contain Acari (mites), Collembola (springtails) and nematodes (roundworms) giving an indication of the environment (Goff 2000).

An experiment carried out by Hilke Schroeder on 117 corpses in 2001 showed the most common summer insect was L. sericata and in the winter months were Calliphora vicina (Diptera: Calliphoridae) and the scuttle fly family. Insect successions are commonly used for PMI estimation and vary between the seasons. Warm seasons have many successions but winter seasons have less succession families to enable us to estimate PMI. Insect identification is vital to determine if a corpse found in summer was stored or hidden in the winter months and disposed of in summer and visa versa. The insect matter on the corpse would prove the family of insect and if summer or winter season insects (Schroeder 2003).

Insects can tell us about locations, some live in specific habitats and if found on a corpse in different environment can prove that the corpse has been moved and therefore the death happened in another location. The identification of these insects will provide information as to where the death likely happened or where the body had been left (Tsokos 2004). For example; the blowfly C. coloradensis is associated with low temperatures at high altitudes (Thomas 2006).

Case Study 4 - On 25th June2005 a clothed corpse was found in Colorado at an altitude of 3350m. Live adult specimens of T. Coloradensis and live 3rd instar larva of L. silvarum were found on the corpse. A single adult of C. Coloradensis was recovered from the body which is quite common for high altitudes unlike the other families found. The absence of more common high altitude carrion insect members suggested not much competition existed giving an indication of time of year the corpse likely arrived there (Thomas 2006).

Insect matter can be enhanced using PCR and random amplified polymorphic DNA (RAPD) typing to provide a DNA profile of insect matter and can be used for inclusions and exclusions in criminal cases. Maggots from different ovipositions can be distinguished using this method which can associate maggots found on a body to maggots found in the boot of a car or in a suspect’s home, linking the suspect and crime scene (Benecke 1998). Other studies on mitochondrial DNA in insects have been carried out to species level but not as successfully when looking within groups (Wallman & Donnellan 2001) and again in 2008 by Harvey et al with very similar results and problems.

Temperature has a massive effect on the development of maggots but this also depends on body size, decomposition stage and location on the corpse. If the body size is of a small child or baby then the temperature will not be as high and the first stage insects (blowflies) can eat the majority of flesh and nothing would be available for the later stage insects, like beetles (O’Flynn 1983).

O’Flynn, M.A., 1983. The succession and rate of development of blowflies in carrion in southern Queensland and the application of these data to forensic entomology. Australian Journal of Entomology. 22 (2), p. 137-148.