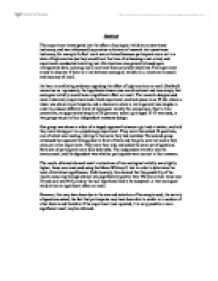 In an attempt to solve both these problems two experiments will be conducted, one in a field setting and one a laboratory to find out if ecological validity, i.e. the high emotional state that witnesses are in, has an effect on recall

Abstract This experiment investigated into the effect of ecological validity on eyewitness testimony, and was influenced by previous criticisms of research into eyewitness testimony, for example Loftus' work was criticized because participants were not in a state of high emotion (as they would be at the time of witnessing a real crime) and experiments conducted involving real-life situations was generally based upon retrospective data, meaning recall may have been somewhat distorted. The experiment aimed to discover if there is a link between ecological validity (i.e. emotional arousal) and accuracy of recall. As there is conflicting evidence regarding the effect of high emotion on recall (flashbulb memories vs. repression), the hypothesis chosen was non-directional and was simply that ecological validity would have a significant effect on recall. The research designs used were a laboratory experiment and a field experiment, and took place in an IT lab, where a video was shown to participants, and a classroom where a real argument was staged, in order to produce different levels of ecological validity for comparison. Due to time constraints, an opportunity sample of 20 grammar school girls aged 12-13 was used, in two groups as part of our independent measures design. One group was shown a video of a staged argument between a girl and a teacher, and told they were taking part in a psychology experiment. They were then asked 10 questions, one of which was leading, relating to the scene they had watched. The second group witnessed the argument taking place in front of them and the girls were not aware they were part of an experiment. They were then told, and asked the same set of questions. Both sets of participants were fully debriefed. The independent variable was the environment, and the dependant was whether participants were correct in their answers. The results obtained showed recall in situations of low ecological validity was slightly higher; these were analyzed using the Mann-Whitney U test in order to determine the level of statistical significance. ...read more.

The argument lasted approximately 2-2 1/2 minutes. * We then staged the same argument for real in front of a pre-decided class of year 8 students who were unaware that the situation was artificial. * After our drama student stormed out of the room, we entered and explained that they had taken part in a psychology experiment, then after asking them not to discuss what happened took them individually outside for questioning. * Each participant was asked the same ten questions; for example 'What was the last thing the teacher said?' One of these was a leading question. Responses were filled in on the answer sheet. * All participants were fully debriefed (see appendix 1) and all questions answered, before permission to use their results was obtained. * Another year 8 class were informed they were taking part in an experiment concerning eyewitness testimony (but not about the leading question) and then shown the pre-recorded video. * Again, participants were taken outside individually, asked the same questions and then debriefed. Ethics: For the field experiment, participants were not made aware of their right to withdraw at first, as doing so would have alerted them to the fact they were in an experimental situation and so would have had a significant effect on our findings. Both the field and laboratory experiments raised the issue of fully informed consent; the first because participants were not made aware of the fact they were part of an experiment and the second because they were not told there were leading questions. However, if they had known of this the validity would have been compromised due to demand characteristics, i.e. they would have known what was expected of them and so either tried to do this, or do the opposite. Both would have distorted results. Informing the participants from the field experiment of the situation would have lowered ecological validity and emotional arousal, meaning an accurate comparison between the two situations would not have been possible. ...read more.

(Participants in both conditions were given the correct answers in debriefing, and informed of the leading question.) Script of argument Student: What's this? Teacher: I don't know, what is it? S: How can you have predicted me an "E" on my UCAS reference? Don't you understand how important this is? I don't understand why you would do this, this is completely unfair! Do you really think Exeter will accept me with this reference? This is going to ruin all my chances. T: Becky, this outburst is not acceptable. Just calm down. Why don't you have a seat and we'll talk about this rationally? S: No! I will not calm down until you admit this prediction is just a way of venting your own personal vendetta towards me! This mark is completely unjustified and we both know it. T: Unjustified? It happens to be my opinion that you will end up with an "E" in my course. Maybe you would have had a better grade if you hadn't spent all term chatting to your mates and messing around, you've missed at least 3 deadlines and missed several lessons. S: What? I've missed one lesson when I was absent, and made all but one of the deadlines! I knew this was because you've got it in for me. You have done ever since I came to your class-always grading me below the other students, marking me as absent when you can see that I'm present, I've seen you do it! This is completely unprofessional and... T: Listen, don't try to make out that this is personal; I simply don't believe that you will do well in the subject, and I believe I graded you fairly. Maybe you should set your sights at a lower university, face it, you're not really Exeter material anyway, are you? S: If you don't change this mark, I'm taking this higher, and I will get results. T: Are you trying to threaten me? I don't have to put up with this, Becky. Get out of my classroom. ...read more.