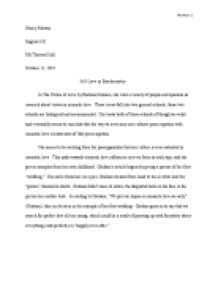 In The Future of Love by Barbara Graham, she cites a variety of people and opinions as research about views on romantic love. These views fall into two general schools; those two schools are biological and environmental.

﻿Morton Nancy Morton English 161 Ms Theresa Kahl October 11, 2012 Is It Love or Biochemistry In The Future of Love by Barbara Graham, she cites a variety of people and opinions as research about views on romantic love. These views fall into two general schools; those two schools are biological and environmental. She treats both of these schools of thought as valid and eventually seems to conclude that the way to overcome our cultures preoccupation with romantic love is awareness of that preoccupation. She seems to be working from the presupposition that our culture is over saturated in romantic love. This push towards romantic love influences us even from an early age, and she gives examples from her own childhood. Graham?s article begins by giving a picture of her first ?wedding.? She and a friend are on a pier, Graham dressed from head to toe in white and the ?groom? dressed in shorts. ...read more.

Another important facet she talks about is biochemistry. Dr. Helen Fisher and other researchers agree that there are three distinct mating emotions and each is supported in the brain by the release of different chemicals. The three mating emotions are l**t, infatuation, and a more nurturing intimacy. l**t, as most everyone knows, is the testosterone levels changing and is associated with our s****l desires. Infatuation, rather than depending on testosterone levels, it depends on dopamine, norepinephrine, and phenylethylamine (PEA), or what some call ?the chemicals of love.? They are very addictive chemicals that stimulate the euphoria and are also the reason we want to stay up and talk all night. Usually within a year this brain chemistry will slow down and a new chemistry consisting of oxytocin and vasopressin, which gives us the nurtured and intimate feelings. The addictiveness of some of these chemicals could explain why some people are constantly in a new relationship; it?s an addiction and they are literally drunk on love. ...read more.

I think she is overstating society?s impact on the individual in regards to the way it influences our thinking of love. On the other hand, I have seen in my sister the way society impacts when she invented an imaginary boyfriend complete with a background story and a Myspace. Even though she clarified that he was imaginary she still liked the idea of him so much she kept him around as a running joke for years. To some extent, especially when younger, we act as though love is a joke or a game we can play with. The article ?The Future of Love? is a psychological and biochemical analysis on love. Barbara Graham expresses her own opinion in this article in hopes of showing that romantic love is very rare or even nonexistent. Graham explains her views in a somewhat firm manner and does go slightly off course sometimes, but does so with confidence. I believe it was a fairly good article and would recommend it to those who want to know the science behind love. ...read more.