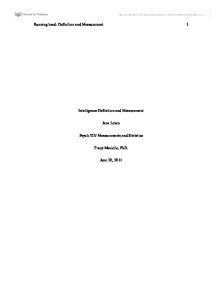 In this analysis four different assessment tests are going to be measured and evaluated, two intelligence, Test of Memory and Learning and Primary Test of Nonverbal intelligence and two achievements, Canadian Achievement Test and Basi

Intelligence Definition and Measurement Jana Lewis Psych 525/ Measurements and Statistics Tracy Masiello, PhD. June 20, 2011 Intelligence and Achievement When we thing of intelligence and achievement we usually think of the terms as being in the same; but in fact, that is not true. Intelligence as defined with my built in Apple laptop dictionary defines intelligences as the ability to acquire and supply knowledge and skills. While this same built in dictionary defines achievement as a thing done successfully, typically by effort, courage, or skill. Alfred Binet wrote the components that make up intelligence included reasoning, judgment, memory, and generalization (Cohen & Swerdlik, 2010). In this analysis four different assessment tests are going to be measured and evaluated, two intelligence, "Test of Memory and Learning" and "Primary Test of Nonverbal intelligence" and two achievements, "Canadian Achievement Test" and "Basic Achievement Skills Inventory. They will also be compared to other major definitions of intelligence, compared to each other and each assessments ethical consideration will be reviewed. Definitions of Intelligence Sir Francis Galton was the first person to publish how heredity can influence intelligence. ...read more.

The Primary Test of Nonverbal Intelligence (PTONI) this test is administered individually by asking the child to point to the object is a set of pictures or geometric designs, which would not go, belong in the picture. This test is for children three years, zero months to nine years, and eleven months. The PTONI was designed particularly to assess and measure the intellectual ability of young children when traditional assessments may not be feasible (Ehrler & McGhee, 2008). David Wechsler states in his assessment that working memory and processing speed. There are also non-intellective factors like personality traits that can affect data scoring. With children even using non-verbal can bring out their personality and contribute to their scoring on such test. (Cohen & Swerdlik, 2010, pg 280). Evaluate the Measures of Intelligence The Primary Test of Nonverbal Intelligence (PTONI) standardized sample included 1,010 children. The children ages were 0-3 to 9-11 years. Each child selected represented standard population of the nation. Test writers reported back appropriate means and standard deviations for both English and foreign language administration showed evidence language had not effect on overall results (Ehrler & McGhee, 2008). ...read more.

These assessment tests can see if there is an area of problem and student can receive the help needed. When using a large sampling it is important to make sure there is not a language barrier, wide arrays of students are used, and keep bias from happening. Conclusion As mentioned in the beginning we think of the terms intelligence and achievement as the same and in fact they are not. Achievement and intelligence testing have their places in an academic setting. These assessments help teachers and parents see exactly where their student is and where they might need areas of help. Out of the four assessments all things were considered and bias was not a problem. References Bardos, A. (2004). Basic achievement skills inventory. Retrieved from EBSCOhost. Cohen, R. J., & Swerdlik, M. E. (2010). Psychological testing and assessment: An introduction to tests and measurement (7th ed.). New York, NY: McGraw-Hill. Canadian Test Centre, E. (2002). Canadian achievement test. (3rd ed.). Retrieved from EBSCOhost. Ehrler, D. J., & McGhee, R. (2008). Primary test of nonverbal intelligence. Retrieved from EBSCOhost. Reynolds, C. R., & Voress, J. (2007). Test of memory and learning. (2nd ed.). Retrieved from EBSCOhost. ...read more.