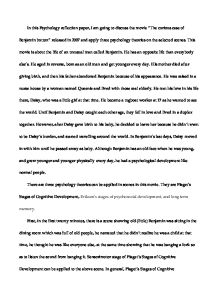 In this Psychology reflection paper, I am going to discuss the movie The curious case of Benjamin button released in 2007 and apply three psychology theories on the selected scenes.

In this Psychology reflection paper, I am going to discuss the movie "The curious case of Benjamin button" released in 2007 and apply three psychology theories on the selected scenes. This movie is about the life of an unusual man called Benjamin. He has an opposite life than everybody else's. He aged in reverse, born as an old man and get younger every day. His mother died after giving birth, and then his father abandoned Benjamin because of his appearance. He was raised in a nurse house by a woman named Queenie and lived with those real elderly. He met his love in his life there, Daisy, who was a little girl at that time. He became a tugboat worker at 17 as he wanted to see the world. Until Benjamin and Daisy caught each other age, they fell in love and lived in a duplex together. However, after Daisy gave birth to his baby, he decided to leave her because he didn't want to be Daisy's burden, and started travelling around the world. In Benjamin's last days, Daisy moved in with him until he passed away as baby. ...read more.

In preoperational stage, children start to develop their language ability in this stage. It lasts from ages 2 to 6. Children in this stage do not have operations, which are reversible mental processes (Kalat, 2008). Also, children are not able to understand concrete logic in this stage, and they have egocentric thought, which is called Egocentrism (Kalat, 2008). Since Benjamin was learning to read the word from the can, it reflected he was in preoperational stage which language development took place. In this stage, children start to learn how to say words and complete sentences, so as to communicate with others. Second, in the scene which is in the later part of the movie, Benjamin was around 20 years old at that time, he was working with his tugboat crew in Russia. He met an English married woman named Elizabeth Abbot in a hotel in Russia. She stayed there because of her husband's job. He started to develop an affair with this woman and this kind of relationship had lasted for several months. It can be applied to Erikson's stages of psychosocial development, it states the effects on different social experience in the whole life. ...read more.

Maple in the nurse house when he was old (young). It showed that he could use his long term memory in this scene. Long-term memory is the process of storing information over long periods of time (Lee, 2011). Long-term memory can be divided into two types - declarative memory and procedural memory. In this scene, Benjamin demonstrated to use procedural memory. Procedural memory is a type of long-term memory of how to do different skills. Cooking and playing sports are examples. It starts to form in the earlier stage of one's life. Though Benjamin failed to recall many things happened in his life, including Daisy, he could still remember how to play piano. It reflected that the skill of playing piano had become his long term memory and he could use it despite the fact that he was having Dementia, which is some brain functions are lost thus affecting memory. There are several psychological theories can be quoted from the movie "The curious case of Benjamin button", including the aforementioned theories, sensorimotor stage and preoperational stage of Piaget's Stages of Cognitive Development and early adulthood stage and middle adulthood stage in Erikson's stages of psychosocial development. Besides, long term memory can be applied to Benjamin in this movie. ...read more.