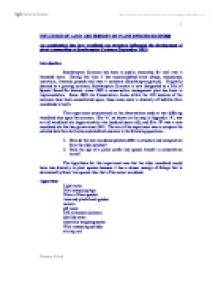 Influence of land use history on plant species richness

INFLUENCE OF LAND_USE HISTORY ON PLANT SPECIES RICHNESS An examination into how woodland age structure influences the development of plant communities on Southampton Common (September 2003) Introduction Southampton Common has been in public ownership for well over a thousand years. During this time it has accommodated army camps, racecourses, reservoirs, livestock pounds and even a cemetery (Southampton.gov.uk). Originally deemed as a grazing common, Southampton Common is now designated as a Site of Special Scientific Interest; since 1993 a conservation management plan has been in implementation. Since 1993 ten Conservation Areas within the 148 hectares of the common have been concentrated upon, these areas cover a diversity of habitats from woodlands to heath. This experiment concentrated on the observations made at two differing woodland sites upon the common. Site 'A', as shown on the map in Appendix 'A', was an old woodland site (approximately two hundred years old), and Site 'B' was a new woodland site that has grown since 1945. The aim of the experiment was to compare the collated data from both sites and establish answers to the following questions: - 1. How do the new woodland patches differ in structure and composition from the older patches? 2. Does the age of a patch confer any special benefit in conservation terms? The hypothesis for this experiment was that the older woodland would have less diversity in plant species because it has a denser canopy of foliage that is dominated by fewer tree species than that of the newer woodland. ...read more.

In regard to conservation it would seem that the age of a patch of woodland does not confer any special benefit in this instance. The results gained suggest that the new site has more diversity, and a more varied environment; making it more favourable as a habitat for a wider selection of flora and fauna than the old site. The hypothesis that the old site would reveal less diversity than the new site, because of its' dominating canopy, proved correct. Also there was only one tree dominating the canopy at the old site, oak; whereas at the new site there were at least four tree species in the canopy. The method used in this experiment was not entirely successful in gathering accurate information. The transect line did not intersect any trees on either site, nor were the girth of trees or number of trees accounted. No method was devised to assess the volume of floor space used by trees in relation to shrubs and other plants. The use of a tape for the transect line actually encouraged members of the group to look down more than up: so the depth, vibrancy and variation of the canopy were overlooked. The photographs taken by Alex were excellent and proved very helpful in later classifying species that were unidentified in the field. The surveying of several five-metre squares at both sites would probably generate more accurate results than of those gained by the method employed in this experiment. ...read more.