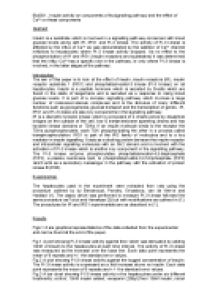 ï»¿Biol301 - Insulin activity on components of its signalling pathway and the effect of Ca2+ on these components Abstract Insulin is a substrate which is involved in a signalling pathway concerned with blood glucose levels along with IR, IRS1 and PI-3 kinase. The activity of PI-3 kinase is affected by the influx of Ca2+ as was demonstrated by the addition of Ca2+ channel inhibitors to hepatocytes where PI-3 kinase activity dropped. As no effect to the phosphorylation of IR and IRS1 (insulin receptors and substrates) it was determined that the influx Ca2+ has a specific role in the pathway, ie only where PI-3 kinase is involved, in the latter stages of the pathway. Introduction The aim of this paper is to look at the effect of insulin, insulin receptors (IR), insulin receptor substrate 1 (IRS1) and phosphatidyinositol-3 kinase (PI-3 kinase) on rat hepatocytes. Insulin is a peptide hormone which is secreted by ß-cells which are found in the islets of langerhans and is secreted as a response to rising blood glucose levels. It is part of a complex signalling pathway which involves a large number of molecule-molecule complexes and is the stimulus of many different functions such as glycogenesis, glucose transport and the transcription of genes. ...read more.

The phosphorylation of IR and IRS1 were measured as described. Fig.4 shows that the different treatments have no significant difference on the phosphorylation of IR other than over the control. Although the agents increase phosphorylation, they do not show a difference beween the effect that they have. Fig.5 shows that the same is true for IRS1 phosphorylation. Discussion From the data collected and the representation in graphical format it can be determined that the activity of PI-3 kinase is affected by insulin activity. Fig.2 shows that as insulin concentrations rise, the activity of PI-3 kinase increases, therefore showing that PI-3 kinase is involved in the signalling pathway. It can also be determined that Ca2+ directly affects the pathway. This is shown in Fig.3. When the hepatocytes were treated with Ca2+ inhibitors (nickel chloride and gadolinium chloride) PI-3 kinase activity drops. The same is shown when the cells are treated with EGTA which prevents the cells from taking up Ca2+. As there is no affect on the phosphorylation of IR and IRS1 when the inhibitors are introduced to the cells it is clear that only the earlier stages of the insulin signalling are affected by Ca2+. ...read more.