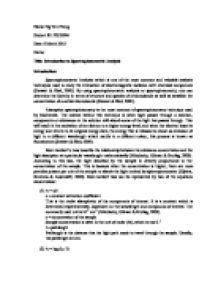 Name: Ng Yen Pheng Student ID: 22353046 Date: 6 March 2012 Demo: Title: Introduction to Spectrophotometric Analysis Introduction: Spectrophotometric Analysis which is one of the most common and valuable analysis techniques used to study the interaction of electromagnetic radiation with chemical compounds (Stewart & Ebel, 2000). By using spectrophotometric analysis or spectrophotometry, one can determine the identity in terms of structure and species of a biomolecule as well as establish the concentration of a certain biomolecule (Stewart & Ebel, 2000). Absorption spectrophotometry is the most common of spectrophotometry technique used by biochemist. The science behind this technique is when light passes through a solution, components or substances in the solution will absorb some of the light that passes through. This will result in the excitation of an electron to a higher energy level, and when the electron loses its energy and returns to its original energy state, the energy that is released is shown as emission of light in a different wavelength which results in a different colour, this process is known as fluorescence (Stewart & Ebel, 2000). Beer-Lambert`s Law describe the relationship between the substance concentration and the light absorption at a particular wavelength mathematically (Mikulecky, Gilman & Brutlag, 2009). According to this law, the light absorbed by the sample is directly proportional to the concentration of the sample. This is because when the concentration is higher, there are more particles present per unit of the sample to absorb the light emitted by spectrophotometer (Zijlstra, Buursma & Assendelft, 2000). ...read more.