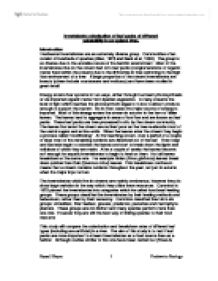 Invertebrate colonisation of leaf packs of different palatability in an upland river.

Invertebrate colonisation of leaf packs of different palatability in an upland river. Introduction Freshwater invertebrates are an extremely diverse group. Communities often consist of hundreds of species (Allan, 1975 and Benk et al, 1984). The group is so diverse due to the unstable nature of the benthic environment. Most of the invertebrates live on the stream bed or in leaf packs (conglomerations of organic matter fixed within the stream) due to the difficulties in free swimming in the high flow environment of a river. A large proportion of the stream invertebrates are insects (others include crustaceans and molluscs) and have been studied in great detail. Energy enters river systems in two ways, either through in-stream photosynthesis or via imported organic matter from riparian vegetation. In many streams the level of light which reaches the photosynthetic algae is to low to allow it produce enough to support the system. So in most cases the major source of energy is imported. Most of this energy enters the stream in autumn in the form of fallen leaves. The leaves tend to aggregate in areas of low flow and are known as leaf packs. These leaf packs are then processed in situ by the stream community. ...read more.

but also in the kick samples of the stream bed, where the proportion of shredders found was statistically similar to that found in the leaf bags. Therefore as shredder are in the majority and perform a crucial role in the ecosystem it would be fair to say that leaf packs are more important to stream invertebrates as food than as a habitat. References Allan, J.D. (1975) The distributional ecology and diversity of benthic insects in Cement Creek, Colorado. Ecology, 56, 1040-1053. Benke, A.C., Van Arsdall, T.C. Jr., Gillespie, D.M. and Parrish, F.K. (1984) Invertebrate productivity in a subtropical blackwater river: The importance of habitat and life history. Ecological Monographs, 54, 25-63. Cummins, K.W. (1973) Trophic relations of aquatic insects. Annual review of Entomology, 18, 183-205. Dobson, M. & Hildrew, A.G. (1992) A test of resource limitation among shredding detritivores in low order streams in southern England. Journal of Animal Ecology, 61, 69-77. Resh, V.H. and Solem, J.O. (1996) Phylogenetic relationships and evolutionary adaptions of aquatic insects. Pages 98-107 in Merritt, R.W. and Cummins, K.W. (Eds.) An introduction to the Aquatic Insects of North America, 3rd ed. Kendall/Hunt, Dubuque, IA. Rowe, L. & Richardson, J.S. (2001) Community responses to experimental food depletion: resource tracking by stream invertebrates. Oceologia, 129, 473-480. ...read more.