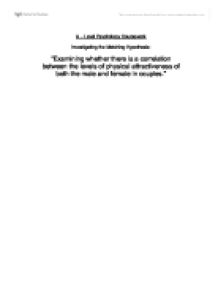 A - Level Psychology Coursework Investigating the Matching Hypothesis: "Examining whether there is a correlation between the levels of physical attractiveness of both the male and female in couples." A-Level Psychology Coursework Introduction For my research I will be investigating the matching hypothesis theory, first proposed by Goffman. He suggested that people chose partners who were of a similar level of attractiveness as themselves. This was not further researched until Walster et al. in 1966 devised a 'Computer Dance'. Over 700 student participants were involved in the study. They were first rated on attractiveness by 4 independent judges and then given a questionnaire, which to their knowledge was to match them to a partner similar to them. However, it had no relevance to the study, and the participants were paired randomly, with the only exception being that no man was paired to a woman taller than them. During the dance the participants were asked to rate their date. It was found the more attractive students (according to the independent judges) were rated more favourably. This did not validly support the hypothesis as the meeting was only brief and therefore the participants could only be rated on superficial characteristics. It also gave no example of a correlation between male and female attractiveness. Therefore a follow-up study was conducted 6 months later. This gave more evidence to support the hypothesis, as it was found that the dates who had become couples after the dance were highly likely to be of a similar level of attractiveness (according to the ratings given to them previously by the independent judges). In 1969 Walster and Walster conducted a similar study, but this time where the participants met each other first. ...read more.

Also, many of my friends are under 18 and therefore I would require parental consent. Instead, I contacted my brother who lives in Brighton and asked him to ask couples in his social group if they would mind having their photos used in my experiment. Each couple emailed me their photos and then posted me their written consent. Using these couples meant that my participants were unlikely to know those in the photos, so greatly reducing the potential for bias. Also, I made sure they were all in the age bracket 18 - 30, so that I wouldn't require parental consent and that the range of ages was not too great (previous studies have shown that the older someone is, the less likely they are to be rated highly on physical attractiveness). I made sure the couples in the photos were given full information of the study, and they were given my phone number so they could call to withdraw from the study at any time. A copy of the email brief sent to all the couples will be contained in the appendix I also had to gain the consent of the participants. I briefed them beforehand, and gave them the option to withdraw before asking them to sign a consent form. Although many psychology studies have the problem of not being able to get fully informed consent, I did not have this problem. In many experiments it is a problem because revealing the full extent of a study can often lead to demand characteristics. However, in my study I could reveal my whole study because as the females were only seeing the male photos, and vice versa, there was no chance of the participants trying to match the couples and rate accordingly etc - therefore no chance of demand characteristics. ...read more.

A further limitation is that conducting the study in Exeter was restrictive, as it has very few ethnic minorities compared to many bigger cities. Using participants just from college also meant a more middle-class viewpoint. Improvement As mentioned in limitations, I could improve on my research by using different age ranges. However, using photos of people aged 16 - 19 would have the possibility of needing parental consent, as well as having couples who are less likely to be in a serious relationship. Instead I could improve my study by asking people (either students or not) who are 18-30 to rate people who would be in the same age bracket as them - therefore eliminating the limitation of the previos study. Further Research One way in which I could alter my study would be to investigate whether the matching hypothesis is true for same-s*x best friends as well as couples, or for gay couples. It has been suggested that while we pick potential partners on physical attractiveness, we pick potential platonic friends on their social qualities. However, it would be interesting to see whether friends judge each other on 'what is fitting' physically too, as Brown proposed we do with partners. Conclusion If I was using just my results alone, I would not have any evidence to support the Matching hypothesis theory. However, as my results were reasonably close to the significance level, I would not dismiss the theory, as it would warrant further investigation. Taking into account the previous studies aforementioned in my introduction, I believe the Matching Hypothesis can be supported, to a certain extent. As my study was only on a small scale I believe previous evidence to be more reliable on the subject. ...read more.