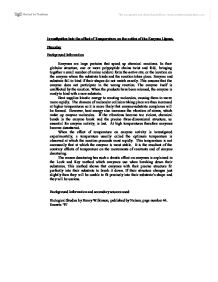 Investigation into the effect of Temperature on the action of the Enzyme Lipase.

Investigation into the effect of Temperature on the action of the Enzyme Lipase. Planning Background Information Enzymes are large proteins that speed up chemical reactions. In their globular structure, one or more polypeptide chains twist and fold, bringing together a small number of amino acids to form the active site, or the location on the enzyme where the substrate binds and the reaction takes place. Enzyme and substrate fail to bind if their shapes do not match exactly. This ensures that the enzyme does not participate in the wrong reaction. The enzyme itself is unaffected by the reaction. When the products have been released, the enzyme is ready to bind with a new substrate. Heat supplies kinetic energy to reacting molecules, causing them to move more rapidly. The chances of molecular collision taking place are thus increased at higher temperatures so it is more likely that enzyme-substrate complexes will be formed. However, heat energy also increases the vibration of atoms, which make up enzyme molecules. If the vibrations become too violent, chemical bonds in the enzyme break and the precise three-dimensional structure, so essential for enzyme activity, is lost. At high temperatures therefore enzymes become denatured. When the effect of temperature on enzyme activity is investigated experimentally, a temperature usually called the optimum temperature is observed at which the reaction proceeds most rapidly. This temperature is not necessarily that at which the enzyme is most stable. It is the resultant of the contrary effects of temperature on the movements of reactants and of enzyme denaturing. The reason denaturing has such a drastic effect on enzymes is explained in the Lock and Key method which enzymes use when breaking down their substrates. ...read more.

These other factors must stay the same in order for the experiment to be fair. Preliminary experiments showed that measuring cylinders were not accurate enough for measuring the volumes of the solutions in the experiment. I rectified this problem in my final method by using 1cm3 and 5cm3 syringes as measuring equipment. To keep the experiment a fair test I have taken some precautionary steps for example the milk has been taken from the same carton and has not been mixed with any other substances. The tests shall be carried out 3 times for each temperature with new (clean) apparatus for each individual test. A test tube of milk will be used as a control check for when the final mixture is being timed for breakdown rate. Preliminary experiments also led me to choose phenolphthalein as my indicator since it gave a pink starting colour (when the solutions were first mixed) that was distinctly different from the white finishing colour of the milk (this enabled the finishing point of the reaction to be more easily detected than when using other indicators). The fact the phenolphthalein was pink in alkali (when the reaction started) and colourless in acid (when the reaction finished) meant it was the best indicator I had at my disposal. The change in pH due to the reaction made phenolphthalein an ideal indicator. The bile salt and sodium carbonate quantities were also manipulated during preliminary experiments to give an adequate pH for the lipase enzymes to work at and to also provide a suitable pH for the phenolphthalein indicator (i.e. a colour change when the reaction is completed). The volumes of full cream milk (eventually 5ml) ...read more.

This could have been avoided by using special machinery that could have detected the pH changes (and therefore the end of the reaction) much more accurately. Better equipment and machinery could also improve other aspects of the experiment as the time could be more precise than the nearest second. These flaws in the method may explain the variation within the results and any other possible anomalies. The evidence obtained by this experiment is quite reliable and there was a fairly wide range of results available, with three repeats for each of the six temperatures. We have to take into account that there were anomalies since there was a lot of variation within the repeat results and this indicates that the experiment may have had flaws. I think that you can base a conclusion upon these results but for the results to be justified I feel that you would have to repeat the experiment in controlled condition making sure all flaws have been accounted for. By repeating the experiment over a wider range of temperatures and more than three times for each temperatures and by implementing my improvements I think that you would achieve much more reliable results. Use of different types of milk with different amounts of fat could be an idea for further work. Also the idea of the effect of temperature on enzyme activity could be broadened to other reactions such as the reaction of amylase and starch. Also the effect of other variables such as pH, concentration and volume on this reaction could be tested. By using machinery the precision and accuracy could be improved and results that could support a firm conclusion could actually be found. ...read more.