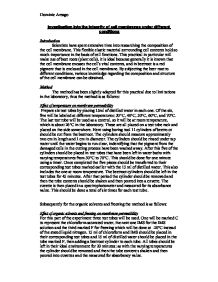 Investigation into the integrity of cell membranes under different conditions

Investigation into the integrity of cell membranes under different conditions Introduction Scientists have spent extensive time into researching the composition of the cell membrane. This flexible elastic material surrounding cell contents hold so much importance in the basis of cell functions. This practical in particular will make use of beet roots (plant cells), it is ideal because generally it is known that the cell membrane encases the cell's vital contents, and in beetroot is a red pigment that is enclosed in the cell membrane. By subjecting the beer root to different conditions, various knowledge regarding the composition and structure of the cell membrane can be obtained. Method The method has been slightly adapted for this practical due to limitations in the laboratory, thus the method is as follows: Effect of temperature on membrane permeability Prepare six test tubes by placing 15ml of distilled water in each one. Of the six, five will be labeled at different temperatures: 30?C, 40?C, 50?C, 60?C, and 70?C. The last test tube will be used as a control, so it will be at room temperature, which is about 26?C in the laboratory. These are all placed on a test tube rack and placed on the side somewhere. ...read more.

Results Here are the corresponding tables for the test tubes Discussion Based on the results obtained from the experiment with the various temperatures, it is justifiable to conclude that the permeability of the membrane will vary based on the temperature it is in. This is clearly shown through graph one. The graph is the results of the six test tubes placed in different temperatures ranging from 30?C to 70?C. The graph exhibits a definite correlation representing the basis of how temperature affects permeability; in the case of this experiment the level of absorbency increased when the temperature was also increased. This is related to the fact that the beetroot was placed in various temperatures. The higher the temperature was the more cells of the beet roots burst, thus in turn increasing the absorbency of the each solution. In other words the higher the absorbance was, the more damage had been done to the cell membrane. This can be explained by understanding the structure and composition of the cell membrane. The cell membrane comprises of a phospholipids bilayer. It is called that because of the structure having two layers of phospholipids, each singular phospholipids comprised of a hydrophilic head and a hydrophobic tail, the head being polar and the tail being non- polar. ...read more.

The IMS solution had a low absorbance in comparison to the chloroform this may be due to the polar nature of all alcohols. Because of their polarity they are not mixable with fats and lipid. The composition of the cellular membrane is mainly lipids and fatty acids. The chloroform had an exceedingly high absorbance value, higher than the absorbance of highest temperature. This results gained suggest that chloroform cause some form of lysis. This causes the detachment from the cell wall, affecting the structure of the bilayer in turn causing the pigment to burst out. This experiment has shown that putting cells in adverse environments such as the organic solvents and high temperatures are very detrimental to their structure. This has shown that organic solvents have a major effect on the chemical nature of the cellular membrane. In this experiment some factors should be consider as the solutions used carried in concentration. This is very important because the use of different concentration may provide different results. As well as in the case of the freezing at -20?C, it will not provide the same results as placing in liquid nitrogen, but it will show where the trend may be going towards on the graph. The basis of the experiment highlighted the factors that contributed to the damage if the beetroot, identifying the tolerance of the cell membrane to various conditions. ...read more.