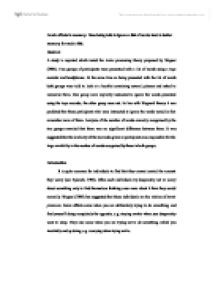 Ironic effects in memory: Does being told to ignore a list of words lead to better memory for such a list

Ironic effects in memory: Does being told to ignore a list of words lead to better memory for such a list. Abstract A study is reported which tested the ironic processing theory proposed by Wegner (1994). Two groups of participants were presented with a list of words using a tape recorder and headphones. At the same time as being presented with the list of words both groups were told to look at a booklet containing several pictures and asked to memorise them. One group were explicitly instructed to ignore the words presented using the tape recorder, the other group were not. In line with Wegner's theory it was predicted that those participants who were instructed to ignore the words would in fact remember more of them. Analysis of the number of words correctly recognised by the two groups revealed that there was no significant difference between them. It was suggested that the similarity of the two tasks given to participants was responsible for the large variability in the number of words recognised by those in both groups. Introduction It is quite common for individuals to find that they cannot control the amount they worry (see Eysenck, 1992). Often such individuals try desperately not to worry about something only to find themselves thinking even more about it than they would normally. Wegner (1994) has suggested that these individuals are the victims of ironic processes. Ironic effects occur when you are deliberately trying to do something, and find yourself doing completely the opposite, e.g. ...read more.

Each word list (A & B) was then randomised and recorded onto audiotape, one word every five seconds. These lists were to be presented to participants in the encoding stage of the experiment. The lists were presented using a standard tape recorder with headphones. The full list of 96 words was also randomised and printed onto one sheet of A4 paper. These were the words that were used in the recognition task. The participants were simply asked to read through the 96 words and put a circle around all those words that they recognised as having been presented previously using the tape recorder. These instructions were printed on a separate sheet and attached to the word list. A separate booklet was created which contained 24 pictures for the participants to look at during the encoding stage of the experiment. Eleven of the pictures were cartoons taken from a Far Side cartoon book (Larson, 1992). The remaining 13 pictures were black and white photographs taken from newspapers and magazines (see Appendix A for examples). The 24 pictures were put into a random order and presented in the booklet. Design The study was conducted as a between participant, experimental design. The independent variable was whether or not the participants were instructed to ignore the taped words. The dependent variable was an adjusted measure of each participant's recognition ability. Participants were randomly allocated to each of the two conditions and were presented with the words on the tape and in the recognition task in a fixed but random order. ...read more.

The first problem with the current study is highlighted by the large variability in recognition scores within each of the two conditions (see Table 1 for standard deviations). The large variability along with the relatively low scores within each group suggests that the participants were to a large extent guessing. This in turn suggests that the participants heard few of the words and thus were unlikely to produce ironic effects. If this is the case then the current design represents an inadequate test of Wegner's theory. Perhaps a better test of the theory would have been to give the participants fewer words to remember and have the words presented more than once. The memory test as it stands is probably too difficult. An interesting possibility for future research might be to assess the effects of anxiety on the likelihood of ironic effects. It has been well documented by Eysenck (1992) that anxiety restricts the amount of conscious cognitive processing capacity available to people. This thus represents a naturally occurring situation of high mental load. In the current study high mental load was induced by requiring participants to memorise pictures. It may perhaps be better to have naturally occurring instances of high mental load. It would thus be of theoretical interest to test participants for ironic effects when they are in an anxious state and see if such effects are more prevalent than at times of low anxiety. In conclusion, the current study has shown that there was no real difference between the ignore and not ignore groups in terms of their ability to recognise the words presented to them on the tape recorder. This represents a failure to support the experimental hypothesis and the ironic processing theory proposed by Wegner (1994). ...read more.