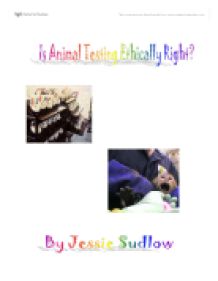 The question that I'm asking is animal testing ethically right? This is a question that some people might agree or disagree with while others may just not care. I recently did some research into whether or not people agreed with this point. The first place I did some research was on www.bbc.co.uk/science. I found out that there were equal answers for For and Against. This could be because it's the bbc and they might have to be none biased because then people might start a riot against them. The reasons that they came up with included: For Against Human life has greater intrinsic value than animal life When locked up they suffer tremendous stress. Can we know they don't feel pain? Millions of animals are killed for food every year - if anything, medical research is a more worthy death Deaths through research are absolutely unnecessary and are morally no different from murder Also on this website I found out about the three R's. This is a theory that zoologist William M. S. Russell and microbiologist Rex L. Burch came up with in 1959 to stop people animal testing and use these methods that were published in "The Principles of Humane Experimental Technique". The methods are: � Replacement - use alternative methods, e.g. testing on cell cultures (in vitro) � Reduction - use statistics to reduce the number of animals that must be used for each experiment � Refinement - improve the experiment to ...read more.

I got these replies: "I don't have a problem with animal testing for medication, if it's the only option and the animals are treated as humanely as possible. Research - well, depends what sort of research, what use it is, and why it's being done - and then I want the animals to be treated as well as possible. I don't approve of animal testing for cosmetics at all." - From Artemis and Hazlac and Scoper "I would like to add that I would like to see more research into possible alternatives to animal testing both for medical and research purposes. I find testing for cosmetics abhorrent, but without medical testing my mum would either be dead or living in agony. I don't know which is worse." - From Gothykitten "Hmm, I guess for the type of drugs needed for the most severe types of disease/illnesses, I could possibly not disagree with the use of animals BUT only in very ltd usage. I'd prefer things like stem cell and embryo testing instead because at least there is more chance of it being truer to humans and how we would be effected by whatever the drug is. For cosmetics nope-surely we now know enough about all the chemicals out there not to have to do this and I am sure there are many people who would love to be paid to test these things out in the final stages once the initial tests are done-surely things ...read more.

Why doesn't the government try to use the alternative methods such as stem cell and embryo testing rather than two animals to test a new drug? Both these things must be more effective due to the fact that it is related to humans whereas animals and humans may and are most likely to react differently to unusual chemicals and ingredients. Even though you hear a lot about people against animal testing, due to the protests and riots that they hold, even in our local area of Huntingdon, there are also those that are for animal testing. This could be due to the fact that they could have had family members that were very sick, or the fact that it's only animals that their testing on and not humans, because obviously an animal life is much better lost than a human life. I mean even if you were against animal testing but you were seriously sick would you say no to a drug that could save your life just because it had been tested on animals? But could you imagine them using those chemicals and strange ingredients on your pet at home? Unfortunately animal researchers say that it will be impossible to eliminate all animal testing but they accept that it is extremely important to reduce the suffering of the animals being tested on, and they will try to use as fewer animals as possible, when more available alternatves become available. ...read more.