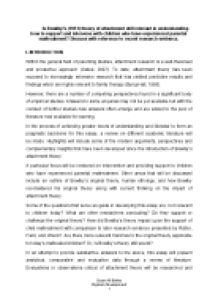 Is Bowlbys (1951) theory of attachment still relevant in understanding how to support and intervene with children who have experienced parental maltreatment? Discuss with reference to recent research evidence.

﻿Is Bowlby?s (1951) theory of attachment still relevant in understanding how to support and intervene with children who have experienced parental maltreatment? Discuss with reference to recent research evidence. I. INTRODUCTION Within the general field of parenting studies, attachment research is a well-theorised and productive approach (Oates, 2007). To date, attachment theory has been exposed to increasingly extensive research that has yielded predictive results and findings which are highly relevant to family therapy (Byng-Hall, 1995). However, there are a number of competing perspectives found in a significant body of empirical studies. Answers to some enquiries may not be yet available but with the conduct of further studies new answers often emerge and are added to the pool of literature now available for learning. In the process of achieving greater levels of understanding and likewise to form an pragmatic backbone for this essay, a review on different academic literature will be made. Highlights will include some of the modern arguments, perspectives and complementary insights that have been developed since the introduction of Bowlby?s attachment theory. A particular focus will be rendered on intervention and providing support to children who have experienced parental maltreatment. Other areas that will be discussed include an outline of Bowlby?s original theory, human ethology, and how Bowlby reconsidered his original theory along with current thinking on the impact of attachment theory. Some of the questions that serve as guide in developing this essay are: Is it relevant to children today? What are other researchers concluding? Do they support or challenge the original theory? How did Bowlby?s theory impact upon the support of child maltreatment with comparison to later research evidence presented by Rutter, Field, and others? Are there more relevant tranches to the original theory applicable to today?s maltreated children? Or, is Bowlby?s theory still sound? In an attempt to provide substantive answers to the above, this essay will present analytical, comparative and evaluative data through a review of literature. ...read more.

In a particular instance, Main and Solomon (1986 in Byng-Hall, 1995) discovered in a group of insecure children (80% of which were in the maltreated group) some who could not be classified under any of the previous categories by Ainsworth (1978). This would seem to indicate that the researchers did not anticipate such an outcome nor had they thought of an organised strategy for handling the way in which the parent and child greet each other on reunion (Byng-Hall, 1995). Byng-Hall (1995) holds the opinion that perhaps the reunion may include a mixture of avoidance and ambivalence or an approach avoidance conflict created by fear of the attachment figure who may be maltreating the infant. Nonetheless, it has become clear that this group is an important one because it is likely to include children who may become part of the clinical population (Byng-Hall, 1995). According to Cassidy (2001), studies have shown that parentally maltreated infants exhibit a disorganised attachment pattern more likely than others. Moreover, child victims of both s****l and physical abuse are very likely to display behaviour that resembles core features of disorganised attachment (Lyon-Ruth and Jacobvitz, 1999 in Cassidy, 2001). 2.5 Attachment Theory: As Theoretical Foundation for Intervention In exploring new solutions on the prevention and treatment of psychological abuse of children by primary carers McMillan et al. (2008) have identified the theory of attachment as one of the four main theoretical approaches in the development of interventions for the treatment of emotional abuse and to prevent, halt or address negative parental effects and state that the use of attachment theory is performed ideally by focusing on ways the parent?s attachment status influences their own parenting behaviours and by determining the impact of such a status to the child?s attachment status. Through this attachment-based approach the study of a parent?s attachment status can perhaps successfully lead to the reduction or prevention of an important aspect of emotionally harmful parent-child relations called maternal insensitivity (MacMillan et al., 2009). ...read more.

Hence these ought to be viewed as the initiating conditions that play a dynamic role in pathological development whereby certain environmental engagements frame subsequent tendencies and expectations (Sroufe et al., 1999). Concerning the applicability of original attachment theory to today, the essence of Bowlby?s theory of attachment still remains relevant as some findings can be taken from its metaphorical value. However, revalidation, if not reconstitution of the methodologies that were once used by Ainsworth (1978) or Main and Solomon (1984), is recommended. Today?s research methodologies are undeniably more stringent and researchers would demand no less for consistency, reliability and reproducibility of results. Where literature suggests that longitudinal studies have contributed to the discovery of several flaws and criticisms, researchers would comment on the limitations and the weakness of Bowlby?s original theory of attachment. For instance Sroufe and colleagues (Roisman et al., 2002 in Barth et al., 2005) studied a sample of high-risk and maltreated children to adulthood and through the longitudinal method discovered discrepancies between predictions based on early childhood assessments of attachment and adult relationship outcomes. In retrospect, the levy that attachment theory has put on the shoulders of mothers - they being the principal attachment figure in a child - is an indication that Bowlby centred on the values of mothering in the shadow of post WWII where huge amounts of separation were experienced by men and women (Rutter, 1997 in Fleming, 2008). He did not anticipate the time when modern mothers would have to do other important things rather than simply devoting their time to rearing a child. As dictated by today?s economics, many more women are in the workforce than were some 60 years ago. Lastly, amidst all the criticism propounded against the works of Bowlby and Ainsworth, be it as a team or in their respective capacities, we should be grateful for their contributions for without them there might never have been a highly acclaimed, if not a controversial, theory that stood out as an inspiration and precedential base for other studies to be undertaken. ...read more.