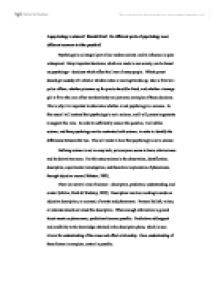 Is psychology a science? Should it be? Do different parts of psychology need different answers to this question?

Is psychology a science? Should it be? Do different parts of psychology need different answers to this question? Psychology is an integral part of our modern society, and its influence is quite widespread. Many important decisions, which are made in our society, can be based on psychology - decisions which affect the lives of many people. Which parent should get custody of a child or children when a marriage breaks up, who is fit to be a police officer, whether prisoners up for parole should be freed, and whether a teenage girl is fit to take care of her newborn baby are just some examples of these decisions. This is why it is important to determine whether or not psychology is a science. In this essay I will contend that psychology is not a science, and I will present arguments to support this view. In order to sufficiently answer the question, I will define science, and then psychology can be contrasted with science, in order to identify the differences between the two. This will make it clear that psychology is not a science. Defining science is not an easy task, yet everyone seems to know what science and its derivatives mean. For this essay science is the observation, identification, description, experimental investigation, and theoretical explanation of phenomena, through objective means (Webster, 1992). There are several aims of science - description, prediction, understanding, and control (Malim, Birch & Wadeley, 1992). ...read more.

and breaking it down to convert it into something black and white (such as a single hypothesis which is either accepted or rejected on the basis of the data collected). When a hypothesis is rejected, the alternative hypothesis is accepted, usually without there being any evidence to support such a conclusion. This means those who reach conclusions that their data does not support abuse the process of understanding the events or phenomena being studied, which is another violation of the aims of the science. This in turn presents problems with the generalisability of research findings in psychology. As well as the methodological problems I mentioned which hamper the generalization of findings, psychologists too often conduct research with small samples, or samples which are not representative of the population (Wallace & Sechrest, 1973). Rats and first-year university students are heavily relied on as participants in psychological research, which ultimately means that generalizations can only be made to other rats and first year university students, which is rarely the case. Many researchers think it appropriate to generalize to the entire population, something that needs to be rectified by using more people from different age groups, as well as different minority groups. The nature of the phenomena being studied in psychological research makes research difficult due to the fact that the mental world cannot be directly observed (Valentine, 1991). Psychology can not measure cognitive or affective aspects of behaviour, such as anger and guilt, using direct observation techniques. ...read more.

This is much more likely to bring credibility to the discipline, something which it seems to be sorely lacking in its current state. I do not think that different areas of psychology need different answers to the questions addressed in this essay. Anything that operates under the umbrella of psychology should be open to the same sorts of criticisms as psychology in general. I do not think the way things are done, with regard to methodology, etc., differs greatly, if at all, within different areas of psychology. Labeling some areas of psychology science is not at all justified at this stage. So in conclusion, psychology is not a science for several reasons, the main reason being that psychological research is conducted in a way that makes understanding, prediction and control close to impossible. There are so many problems that still need to be overcome by those working in the profession before psychology comes close to resembling a science. Methodological issues such as sample sizes and characteristics need to be addressed, as do methods used to analyze and report research findings. Serious consideration should be given to including confidence intervals, and not just p-values in research. Psychologists should stick to material which they can investigate in a scientific manner if they wish to call themselves scientists. Investigating the subject matter in a scientific way will bring credibility to the discipline, and improve its standing. This should be the main aim for psychologists, not scrambling to make their methods appear scientific in order to have psychology be considered a science. ...read more.