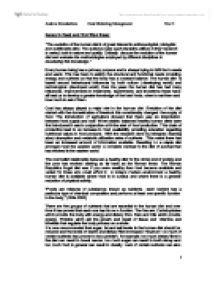 Issues in Food and Nutrition Essay

Issues in Food and Nutrition Essay "The evolution of the human diet is of great interest to anthropologists, biologists and nutritionists alike. The evidence base each discipline utilises in their research is varied, both in nature and quality. Critically discuss the evolution of the human diet and evaluate the methodologies employed by different disciplines in developing this knowledge," Every human being has a primary purpose and is always trying to fulfil their needs and wants. This has been to satisfy the structural and functional needs providing energy and nutrients so that the body has a constant balance. The human diet is based around behavioural influences by both culture (developing world) and technological (developed world) Over the years the human diet has had many influences, improvements in treatments, experiments, and inventions these have all lead us to develop a greater knowledge of the best foods, when to eat them and how much to eat of them. Cost has always played a major role in the human diet. Evolution of the diet started with the domestication of livestock this considerably changed the supply of food. The introduction of agriculture showed that there was an interrelation between food supply and cost. When stable, balanced healthy human diets were first introduced it was in conjunction with the start of food production. This chain of production lead to an increase in food availability providing education regarding nutritional values in food products. With the research done by biologists learning about absorption and metabolic utilization rates of nutrients. This meant there has been an increased amount of information available. Resulting in a staple diet amongst most the western world. ...read more.

Nutritionists believe that if children, as young as two to three years, are educated and brought up in a healthy environment then this will develop through later life. Group sessions on Healthy Toddler Nutrition have been set up. The Nutrition Society plays a key role in the development of these methodologies. Food refusal is a major problem that has evolved, so nutritionists have adopted an approach of setting up home visits to support families with their child's eating problems. "Sure Start" centres have been set up also by the Nutrition Society for mothers to be educated on basic food issues. Technological advances have also aided the role of nutritionists. Computerised nutrient analysis helps to calculate nutrient intake in relation to the statistical data. However there is a major challenge for nutritionists to develop better methods for rapidly screening and assessing dietary intakes. With patient care a prime objective. However these developments have been improving as the human diet has evolved but the methodologies implemented need to continue to keep addressing the problem in diet and nutrient intake. Nutritionists still have to be high skilled, well instructed and work in cooperation with biologists, anthropologists, and dieticians. " the focus on the study of human beings and their way of life,"(Shils 2000) Anthropologists have tried to find distinct separation between the food as a biological necessity and also the cultural factors that condition its availability and consumption. In essence they are looking at the same preface as nutritionists however with a varied priority. Where as nutritionists seem to focus on nutrient intake of the big five in relation to achieving a healthy human diet, anthropologists assess lifestyle changes and finding the right diet and nutrient intake to suit ...read more.

The human diet on a whole has not really evolved. The same objectives, recommendations and guidelines are still being set out. This is evident in a report released from The Department of Health on the 12th December 2002, the report stated; "The Plan will address food production, manufacture and preparation, access to healthier food and providing information for consumers about healthy eating and nutrition. It will build on existing work to improve diet and nutrition including:reforming the Welfare Food Scheme, the National School Fruit Scheme, the Five-a-Day programme to increase fruit and vegetable consumption, work with undustry to reduce salt, fat and sugar in the diet, local action to tackle obesity and increase physical activity and the hospital nutrition policy. The Food and Health Action Plan will pull together all of the issues that influence what we eat. Action will involve all sections of the food chain including food growing, food processing, manufacture, retailers, caterers and consumers" Galen of Pergamus who was a personal physician of the emperor Marcus Aurelus, quotes: "You should do a lot of exercise and not overeat" (HUNT 1994) So how much has the Human diet evolved ? not a lot if were still trying to reiterate a point that was evident thousands of years ago. The discussion of the human diet is massive. There has been so much changing, and so much more information being found that makes it impossible to point at the exact changes of "the evolution of the human diet". To discuss this topic and focus on three various opinions in such a precise way is near impossible. ...read more.