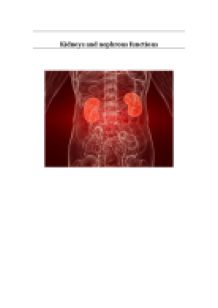 (2012) [Online]. Kidneys are also responsible for production of hormones that may have an effect on functions of other systems such as a particular hormone obtained from kidneys will initiate production of erythrocytes, where another hormone obtained from kidneys will maintain blood pressure and calcium levels National Kidney Foundation. (2012) [Online]. As mentioned above homeostasis of water and electrolytes depends on kidney function National Kidney Foundation. (2012) [Online]. If renal filtration would not take place, blood plasma?s range point would change dramatically National Kidney Foundation. (2012) [Online]. However, without cardiovascular system, which is responsible for maintenance of blood pressure, the kidneys would not be able to process blood plasma (Thibodeau & Patton 2007). For that reason both urinary and cardiovascular mechanisms are dependent on each other respectively (Thibodeau & Patton 2007). Urinary system is also interdependent on nervous because nerve reflexes control urinary functions. Also endocrine system interacts with urinary functions as regulation of urinary system take place outside the kidney by endocrine hormone production (Tortora & Derrickson 2007). The kidneys removes nitrogen waste and unwanted metabolic acids from blood plasma, which was formed sue to chemical reactions in almost every cell in the body (Tortora & Derrickson 2007). They can also remove toxins and other substances that can be found in the blood via respiratory or digestive tracts (Tortora & Derrickson 2007). ...read more.