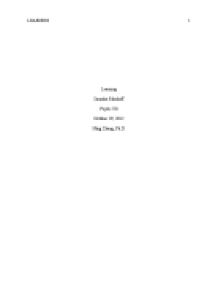 Learning - social, cognitive, and developmental psychologies offer several theories suggesting regarding what, when, why, and how people acquire knowledge.

﻿LEARNING Learning Saundra Moskoff Psych 550 October 29, 2012 Ming Zheng, Ph.D. ________________ Learning The acquirement of information resulting in openly discernable and reasonably stable behavioral changes defines how people acquire knowledge (Terry, 2009). People learn during every stage of life. Toddlers who burn their hands after unintentionally touching a hot stove learn they should not touch a hot stove. Because she wanted to look cute in a short skirt, despite the cold temperature, teenage girls learn they need to don more clothing in cold weather, and adults learn how their behavior, such as using profanity, offends others. Concept of learning The concept of learning remains a longstanding debate in psychology. Disciplines, such as the social, cognitive, and developmental psychologies offer several theories suggesting regarding what, when, why, and how people acquire knowledge. What According to University of Wisconsin Stevens Point (2005), learning involves four kinds of information attainment, transmission, acquisition, accretion, and emergence. Transmission refers to the conveying of information from one to another through display, direction, or instruction, such as traditional education. ...read more.

For example, a child wants a toy, asks by saying, ?toy,? and, receives the toy. Not possessing a toy and wanting a toy promoted the response, which resulted in obtaining a toy. The cognitive approach The cognitive approach centers on mental processes, such as memory and expectancies. Because the method emphasizes intellectual processes, the approach is in opposition to the behavioral approach, which fundamentally ignores intellectual processes. The neuroscience approach Neuroscience studies prove that learning improves during low levels of stress, and the discharge of stress hormones hinders the innate conduit for learning (Lupien, Maheu, Tu, Fiocco, & Schramek, 2007). The research offers a physical reason for the mental discomfort experienced in periods of anxiety and fear. Terry (2009) explained because research from a neural sciences method demonstrates the brain possesses habit and cognitive learning systems, perhaps reconciliation between behavioral and cognitive psychologies are imminent. Conclusion The definition of learning is filled with nonspecific categories and encourages various theories. Learning begins immediately after birth, progresses during developmental states, and endures indefinitely. ...read more.