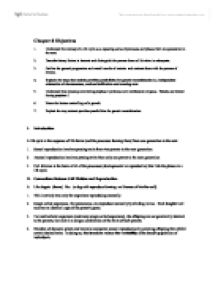 Chapter 8 Objectives 1. Understand the concept of a life cycle as a repeating series of processes and phases from one generation to the next. 2. Describe binary fission in bacteria and distinguish the process from cell division in eukaryotes. 3. Outline the general progression and overall results of meiosis and contrast them with the process of mitosis. 4. Explain the ways that meiosis provides possibilities for genetic recombination i.e. independent orientation of chromosomes, random fertilization and crossing over. 5. Understand that crossing over during prophase I produces new combination of genes. Tetrads are formed during prophase I. 6. Name the factors controlling cells growth. 7. Explain the way meiosis provides possibilities for genetic recombination. I. Introduction. A life cycle is the sequence of life forms (and the processes forming them) from one generation to the next. 1 . Sexual reproduction involves passing traits from two parents to the next generation. 2 . Asexual reproduction involves passing traits from only one parent to the next generation. 3 . Cell division is the basis of all of the processes (developmental or reproductive) that link the phases in a life cycle. II. Connections Between Cell Division and Reproduction. A. Like begets (forms) like. (a dog with reproduce forming an likeness of him/her self). ...read more.

2. In plants, vesicles containing cell wall material collect among the spindle microtubules, in the center of the cell, then gradually fuse, from the inside out, forming a cell plate which gradually develops into a new wall between the two new cells. The membranes surrounding the vesicles fuse to form the new parts of the plasma membrane. E. Anchorage, cell density, and chemical growth factors affect cell division. 1 . To grow and develop, or replenish and repair tissues, multicellular plants and animals must control when and where cell divisions take place. 2 . Most animal and plant cells will not divide unless they are in contact with a solid surface; this is known as anchorage dependence. 3 . Laboratory studies show that cells usually stop dividing when a single layer is formed and the cells touch each other. This density-dependent inhibition of cell growth is controlled by the depletion of growth factor proteins in masses of crowded cells. F. Growth factors signal the cell-cycle control system Cancer is a general term for many diseases in multicellular animals and plants involving uncontrolled cell division with the resultant tumor metastasizing 1. Cancer cells grown in culture are not affected by the growth factors that regulate density-dependent inhibition of cell division. ...read more.

Independent Assortment of Chromosomes Independent assortment = The random distribution of maternal and paternal homologues to the gametes. (In a more specific sense, assortment refers to the random distribution of genes located or' different chromosomes.) *Since each homologous pair assorts independently from all the others, the process produces 2 n possible combinations of maternal and paternal chromosomes in gametes, where n is the haploid number. *In humans, the possible combinations would be 223, or about eight million. *Thus, each human gamete contains one of eight million possible assortments of chromosomes inherited from that person's mother arid father. B. Crossing Over Another mechanism that increases genetic variation is the process of crossing over, during which homologous chromosomes exchange genes. Crossing over = The exchange of genetic material between homologues; occurs during prophase of meiosis I. This process: *Occurs when homologous portions of two nonsister chromatids trade places. During prophase I, X-shaped chiasmata become visible at places where this homologous strand exchange occurs. *Produces chromosomes that contain genes from both parents. *In humans, there is an average of two or three crossovers per chromosome pair. C. Random Fertilization Random fertilization is another source of genetic variation in offspring. *In humans, an egg cell that is one of eight million different possibilities will be fertilized by a sperm cell that is also one of eight million possibilities. Thus, the resulting zygote can have one of 64 trillion possible diploid combinations. ...read more.