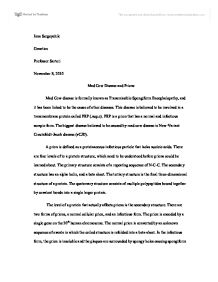 Inna Sergeychik Genetics Professor Sartori November 8, 2010 Mad Cow Disease and Prions Mad Cow disease is formally known as Transmissible Spongiform Encephalopathy, and it has been linked to be the cause of other diseases. This disease is believed to be involved in a transmembrane protein called PRP (.sup.c). PRP is a prion that has a normal and infectious scrapie form. The biggest disease believed to be caused by mad cow disease is New-Variant Creutzfeldt-Jacob disease (vCJD). A prion is defined as a proteinaceous infectious particle that lacks nucleic acids. ...read more.

The level of a protein that actually affects prions is the secondary structure. There are two forms of prions, a normal cellular prion, and an infectious form. The prion is encoded by a single gene on the 20th human chromosome. The normal prion is converted by an unknown sequence of events in which the coiled structure is refolded into a beta-sheet. In the infectious form, the prion is insoluble and the plaques are surrounded by spongy holes causing spongiform encephalopathy. The prions induce death in the host without any signs of immune response to the infectious agent. ...read more.

Bovine spongiform encephalopathy was then seen in cows in 1984. It was described as the new scrapie-like syndrome. The disease was thought to be transferred by ingestion of sheep by-products from sheep that had scrapie. There are other forms found in mink, elk, and deer. Meat products from infected animals contained bits if offal before being banned, which was put into pharmaceuticals, supplements, and cosmetics. One way to become infected is to ingest food, or one of these products contaminated with the insoluble prions. The second way to get this form of the prion is from a tainted pituitary gland of an affected cadaver. Mad Cow disease is obviously very serious and always fatal. ...read more.