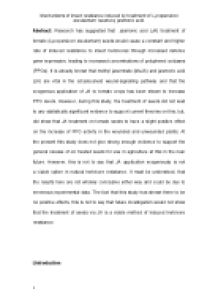 ﻿Mechanisms of insect resistance induced by treatment of Lycopersicon esculentum seeds by jasmonic acid. Abstract: Research has suggested that jasmonic acid (JA) treatment of tomato (Lycopersicon esculentum) seeds would cause a constant and higher rate of induced resistance to insect herbivores through increased defence gene expression, leading to increased concentrations of polyphenol oxidases (PPOs). It is already known that methyl jasomnate (MeJA) and jasmonic acid (JA) are vital in the octadecanoid wound-signalling pathway and that the exogenous application of JA to tomato crops has been shown to increase PPO levels. However, during this study, the treatment of seeds did not lead to any statistically significant evidence to support current theories on this, but, did show that JA treatment on tomato seeds to have a slight positive effect on the increase of PPO activity in the wounded and unwounded plants. At the present this study does not give strong enough evidence to support the general release of JA treated seeds for use in agriculture at this in the near future. However, this is not to say that JA application exogenously is not a viable option in natural herbivore resistance. It must be understood, that the results here are not wholely conclusive either way and could be due to erroneous experimental data. The fact that this study has shown there to be no positive effects, this is not to say that future investigation would not show that the treatment of seeds via JA is a viable method of induced herbivore resistance. I.Introduction The aim of this study was to examine the effects of the plant signalling hormone jasmonic acid (JA) on the induced resistant mechanisms of Lycopersicon esculentum , or common tomato plants, when the seeds were treated with a 1.5mM solution of JA, most notably the effect on polyphenol oxidase (PPO), a proteinase inhibitor in plants. Polyphenol oxisase, an oxidative enzyme has been found to act as a protease inhibitor in the guts of foraging insect herbivores (Ryan et al., 1990) ...read more.

of catalase was added. Before the enzyme extraction was added the spectrophotometer was zeroed out on the assay to give a 0 second reaction rate and to give a control of when the rate was being measured from. The assays were repeated 3 times to give a mean value. This assay procedure was a modification of that as described by Sherman et al., (1991). Standardisation Of Protein Assays: To determine the protein concentrations in each of the assays, the Bradford protein assay was carried out. Varied concentrations of BSA (bovine serum albumin) ranging from 10mg/ml to 1.2mg/ml made up to 50ml with the appropriate amount of H2O for each of the protein standards (2000-0). 1.5ml of Coomassie Plus Protein Assay Reagent was added to the BSA solution in 2ml UV transparent cuvettes. The assay was then left to stand for 10 minutes so that the reaction between the BSA and the Coomassie would reach its optimum and for the desired blue colouration to be achieved. The spectrophotometer was blanked on water and then each sample was measured at 595nm. The results were repeated, the 0 reading was then subtracted from the reading taken, as shown by the Coomassie standardisation procedure. This was repeated 3 times so that a mean value could be achieved and then plotted. To take a reading which could be compared to the standards in order to get a standard concentration for the PPO in the assay, 1.5ml of Coomassie Plus Protein Assay Reagent was added to 50µl of the extract. Again, the assay was run for 10 minutes when a reading was taken. The curve plotted was then used to determine the protein concentrations of PPO in the extracted supernatant, which enables the results to be quantified according to the amount of PPO present in the assay. III.Results The results used and explained here are those from the PPO extraction and assay 2 as set out in the experimental. ...read more.

Firstly, the actual growing of the plants took at first, a minimum waiting time of two-three weeks. When the plants were ready to be wounded and then have the assays run, it was noticed that the method being used was not compatible with the tomato plants and so a new experimental had to be drawn up, leading to the writing of PPO extraction and Assay 2. At this point, it was realized that there was not enough time left in the laboratory schedule to allow the re-growing and then repeating of all the experiments, and so it was decided to just examine the main effects of the treatment, to see if it increased PPO levels in wounded and unwounded plants. To improve the study, assays to determine the concentrations of PPO expressed at different times after wounding in same age plants, ie after 0, 2, 4, 6 hours would be run as would assays to determine the concentration of PPO expressed at same time on different age plants, eg 4 hours after wounding on a 1, 2, 3 week old plant up to 5 weeks and finally a set of assays to determine the concentration of PPO expressed on different age plants at different times after wounding. Also, by increasing the dosage of JA, this might show an increase in induced resistance. In conclusion to this study, it would be recommended that more time is given to researching the possibility of JA seed treatment in crop plants, as although the findings of this study were not statistically significant, they do show some evidence that JA has a positive effect of PPO levels and induced wound resistance and along with other studies such as those by Thaler (1997) and Shailasree (2001), gives weight to the use of naturally induced resistance via seeds rather thatn the use of chemical pesticides. V. Acknowledgements I would like to thank Dr Mike Roberts for his time and patience in the laboratory and Dr Nigel Paul for the loan of equipment. V!. ...read more.