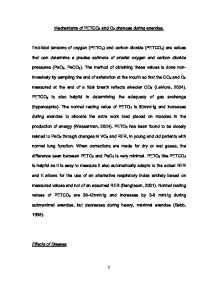 Mechanisms of PETCO2 and O2 changes during exercise.

Mechanisms of PETCO2 and O2 changes during exercise. End-tidal tensions of oxygen (PETO2) and carbon dioxide (PETCO2) are values that can determine a precise estimate of arterial oxygen and carbon dioxide pressures (PaO2, PaCO2). The method of obtaining these values is done non-invasively by sampling the end of exhalation at the mouth so that the CO2 and O2 measured at the end of a tidal breath reflects alveolar CO2 (LeMura, 2004). PETCO2 is also helpful in determining the adequacy of gas exchange (hypercapnia). The normal resting value of PETO2 is 90mmHg and increases during exercise to allocate the extra work load placed on muscles in the production of energy (Wasserman, 2004). PETO2 has been found to be closely related to PaO2 through changes in VO2 and RER, in young and old patients with normal lung function. When corrections are made for dry or wet gases, the difference seen between PETO2 and PaO2 is very minimal. PETO2 like PETCO2 is helpful as it is easy to measure it also automatically adapts to the actual RER and it allows for the use of an alternative respiratory index entirely based on measured values and not of an assumed RER (Bengtsson, 2001). Normal resting values of PETCO2 are 36-42mmHg and increases by 3-8 mmHg during submaximal exercise, but decreases during heavy, maximal exercise (Babb, 1998). Effects of Disease Though PETCO2 is a good indicator of gas exchange in healthy adults the accuracy decreases when compared to PaCO2 when measured in patients with lung disease or chronic obstructive pulmonary disease (Babb, 1998). ...read more.

Mechanisms of Hyperventilation The respiratory compensation point (RCP) marks the onset of hyperventilation during incremental exercise. Its physiological meaning has not yet been definitely determined, but the most common explanation is a failure of the body's buffering mechanisms which leads to metabolic (lactic) acidosis and an increase in dissolved CO2 causing an increase in VCO2 (Meyer, 2004). There has been extensive research to show that acidosis is part of the mechanism. In trained, young runners, it was seen that the degree of desaturation was inversely related to the degree of acidosis (Gledhill, 1980). Gledhill concluded that with a reduced metabolic acidosis there is less of a compensatory hyperventilation which leads to a decrease in PAO2. This is consistent to other findings where another study showed that endurance training induces a reduced ventilatory response to submaximal exercise for a given workload. Concluding that due to the lactate threshold becoming present at a higher given work load in endurance trained individuals the ventilatory response is lower at a given work rate than in untrained individuals relaying the notion that acidosis is a trigger towards hyperventilation. It can be seen in some highly trained endurance athletes that because there lactate threshold is at such a high work rate when compared to non-trained individuals that a reduced ventilatory response can actually lead to an increase in PaCO2 during exercise. This response was also observed in another study where higher levels of arterial partial pressure of CO2 (PaCO2) were reported in young and older highly trained athletes than in untrained individuals for the same maximal workload or a relative or absolute submaximal workload (Caillaud, 1993). ...read more.

as seen by a slight increase in PETCO2 also known as the 'isocapnic buffering phase'. The start of is also to be said to coincide with the lactate threshold. Excess CO2 triggers a response to increase the respiratory rate (respiratory compensation phase) and thus increases the VCO2. Metabolic acidosis is said to be the main trigger to this response but other variables also play a role in increasing the respiratory rate. During this phase PETCO2 falls due to a higher VCO2. No significant differences are seen between PETCO2 levels when exercising different muscle masses. Concluding that PETCO2 may be governed by the relative intensities of arm cranking and leg cycling and not just down to the exercising muscle mass. Inconclusive evidence suggests that lactate could also be governed in the same way but due to variability between studies this cannot be taken as definite and thus more research is needed to be done to define the physiological responses to exercising different muscle masses. PETO2 however may behave differently when different sized muscle masses are exercise. Calbet (2005) examined O2 extraction during arm exercise and leg exercise. They concluded that the upper extrimity muscles less O2 at a given intensity when compared to lower extremity exercise. In theory if more O2 is extracted from haemoglobin during leg exercise at the same relative intensity then the values for PETO2 will be lower due to there being less O2 being present in arterial blood when measurements are taken at the end of a tidal breath. These findings by Calbet (2005) allow the conclusion that PETO2 is governed by the size of the exercising muscle mass and not by the relative intensity at which they are exercising at. ...read more.