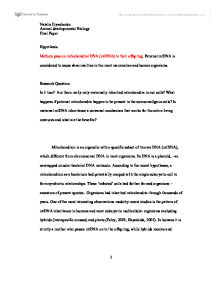 Mitochondrial genetics. Are there really only maternally inherited mitochondria in our cells? What happens if paternal mitochondria happen to be present in the autosomal/germ cells? Is maternal mtDNA inheritance a universal mechanism that works for the en

Hypothesis. Mothers pass on mitochondrial DNA (mtDNA) to their offspring. Paternal mtDNA is considered to cause abnormalities in the most mammalian and human organisms. Research Question. Is it true? Are there really only maternally inherited mitochondria in our cells? What happens if paternal mitochondria happen to be present in the autosomal/germ cells? Is maternal mtDNA inheritance a universal mechanism that works for the entire living creatures and what are the benefits? Mitochondrion is an organelle with a specific subset of its own DNA (mtDNA), which different from chromosomal DNA in most organisms. Its DNA is a plasmid, - an unwrapped circular bacterial DNA molecule. According to the recent hypotheses, a mitochondrion as a bacterium had potentially merged with the single eukaryotic cell to form symbiotic relationships. These 'infected' cells had further formed organisms - ancestors of present species. Organisms had inherited mitochondria through thousands of years. One of the most interesting observations made by recent studies is the pattern of mtDNA inheritance in humans and most eukaryotic multicellular organisms excluding hybrids (interspecific crosses) and plants (Foley, 2003; Hayashida, 2005). In humans it is strictly a mother who passes mtDNA on to the offspring, while hybrids receive and express both maternal and paternal inheritance in different tissues (Ankel-Simons, Cummins, 1996; Brandon et. ...read more.

Considering mammals and humans closely related on the mitochondrial level we would assume these stats to be the same for human maternal offspring as well. This could mean that there is an occasional paternal mtDNA expression in some cells of eukaryotic organisms, but it is so small that it does no affect the overall cellular processes. Separately studied human offspring, however, showed no inheritance of paternal mtDNA (poor data) (Danan, 1999; Hayashida, 2005). 3. There is no evidence for paternal and maternal mtDNA fusing together and forming new mtDNA. mtDNA reproduces asexually by splitting into two daughter cells, which are not always identical: a. Rare maternal cell's mutations can be expressed in one of the daughter cells, while another daughter cell does not carry any mutations. Thus a child can end up carrying both normal and mutant mtDNA - this phenomenon is called heteroplasmy (Cables, 2002; Danan, 1999; Foley, 2003); b. Paternal and maternal mtDNA cannot be fused together because of the asexual reproductive process each one undergoes separately. It's easier to carry on a specific stable maternal set of mtDNA, which it is not mixed with paternal mtDNA set (like in the chromosomes). Although the hypotheses discussed above state that sperm mtDNA cannot be inherited, the point 2.2 and some other exceptions can potentially ...read more.