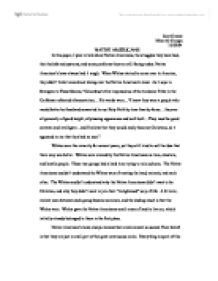 Joey Greene Minority Groups 11/23/04 Native Americans In this paper, I plan to talk about Native Americans, the struggles they have had, their beliefs and customs, and some problems they are still facing today. Native American's have always had it rough. When Whites started to come over to America, they didn't think twice about taking over the Native American's land. As it says in Strangers to These Shores, "Columbus's first impressions of the Arakawa Tribe in the Caribbean reflected ethnocentrism... His words were..."I knew they were a people who would better be freed and converted to our Holy Faith by love than by force... they are all generally of good height, of pleasing appearance and well built...They must be good servants and intelligent...and I believe that they would easily become Christians, as it appeared to me that they had no sect." Whites were the minority for several years, yet they still tried to sell the idea that there way was better. Whites were viewed by the Native Americans as liars, cheaters, and hostile people. ...read more.

It is traditional to give a prayer of Thanks as well as leaving a gift. Some prayers are to help the animal's spirit to complete its journey to the afterlife, and also thanking the animal's spirit for giving up his life to help others survive. Tobacco was a typical offering because the Native Americans viewed tobacco as a strong "medicine" that is satisfactory to the Creator. Prayers followed by an offering of tobacco will be heard by the Creator. Prayers and offerings were also made when Native Americans used plants, trees, and other materials from the land. Everything had a spirit and they were given the same honor, by saying a prayer of thanks. One of the most significant parts of a Native American community is its clan system. Historically, the clan system was used to keep order between people. Every clan had a job or obligation within the community. They were either, leaders, diplomats, guardians, or suppliers for the tribe people. ...read more.