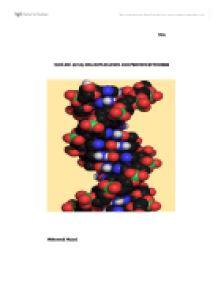 Bina NUCLEIC ACUD, DNA REPLICATION AND PROTEIN SYNTHESIS Mohammed Majeed Mohammed Majeed Bina Biology key skills Poodles make more poodles. Sheep make more sheep. Replication is a basic fact of life. All living things make other living things that are to one degree or another duplicates of themselves. What is the mechanism behind all this? The answer lies in a molecule called DNA. In 1869, Friedrich Miescher extracted a substance, which he called nuclein from the nuclei of white blood cells. Nuclein later became known as nucleic acid. Living cells contain two kinds of nucleic acids-ribonucleic acid (RNA) which contains the sugar, ribose and deoxyribonucleic (DNA) which contains the sugar, deoxyribose. Nucleic acids are found in all living things, from the simplest protozoan to the most complex forms of animal and plant life . Two young scientists-James Watson and Francis Crick-finally pieced together the precise structure of DNA. The model proposed by Watson and Crick for the structure of DNA is shaped like a twisted ladder. This type of figure is known as a double helix. The sides of the twisted ladder are made up of alternating units of deoxyribose and phosphate. The rungs of the ladder are composed of paired nitrogen bases. Adenine always pairs with thymine, and guanine always pairs cytosine. ...read more.

This makes deoxyribose more stable than ribose. * The phosphate is linked to the 5' carbon of the sugar in both RNA and DNA. * The nitrogenous bases are adenine(A), guanine(G), cytosine(C), thymine(T), and uracil(U). o Adenine and guanine are purines (contains a six membered ring of carbon and nitrogen fused to a five membered ring). o Adenine and guanine are both found in DNA and RNA. o Cytosine, thymine and uracil are pyrmidines (contains a six membered ring of carbon and nitrogen). o Cytosine is found in both DNA and RNA, but thymine is only found in DNA and uracil is only found in RNA. * A nucleotide is formed when a phosphate attahes to the 5' carbon of the sugar and one of the nitrogenous baseses attaches to the 1' carbon of the sugar. * A strand of DNA or RNA consists of nucleotides linked together by phosphodiester bonds. o A phosphodiester bond exists between the phosphate of one nucleotide and the sugar 3' carbon of the the next nucleotide. o This forms a backbone of alternating sugar and phosphate molecules known as the "sugar-phosphate backbone". * RNA, in most cases, consists of one strand of nucleic acids linked together by phosphodiester bonds. * A DNA molecule consists of two strands of nucleotides twisted together to form a double helix. o The sugar-phosphate backbone is found on the outside of this helix and the bases are found braching towards the middle. ...read more.

Overall this is a very disjointed piece of work. It is repetitive in several places, and gives the overall impression that it may have been copied from a number of different sources.

The diagrams, where included, are not particularly well tailored. Custom diagrams would make this a lot easier to follow.

A number of misconceptions or sloppy explanations have crept in: (e.g. U=A rather than uracil pairs with adenine).

This is also frustrating to read because of the sporadic use of coloured highlighting, and the discrepancies in formatting.

At my (Russell group) university this might just scrape a 3/5.