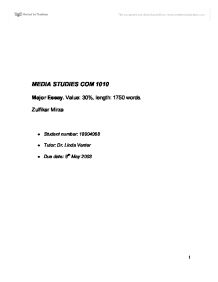 &quot;Only a critical political economy approach can adequately explain how the media work today&quot;. Discuss the pros and cons of this statement, with reference to the following sector of modern media: Advertising.

MEDIA STUDIES COM 1010 Major Essay. Value: 30%, length: 1750 words. Zulfikar Mirza * Student number: 18904068 * Tutor: Dr. Linda Venter * Due date: 9th May 2003 Question 2. "Only a critical political economy approach can adequately explain how the media work today". Discuss the pros and cons of this statement, with reference to the following sector of modern media: Advertising. INTRODUCTION To be able to discuss the pros and cons of the statement, one must first find out exactly what the statement is declaring. It suggests that the media can only be analyzed from a critical political economy perspective. Though the statement holds a lot of weight, it is only fair to consider exactly what the statement argues. For this essay the advertising sector of media shall be taken into consideration, as we uncover the truth behind the advertiser consumer connection. Critical Political Economy Taken from Marxist studies concerning the relations between labor and capital, 'political economy' focuses on the structures in media that possess political and economic control. The Marxist political economy believes that in the mass media there is a definite trend to avoid the 'unpopular and unconventional' and to focus on values and assumptions which are most important and most widely accepted (Murdock & Golding 1977: 37, cited in Curran et al. 1982: 26). ...read more.

As media capital becomes concentrated, so do the interests that shape media content. The mass media make money mostly by selling time, space and audiences to advertisers, and only a less significant amount from consumers. What this means practically is that the interests of advertisers will be prioritized over those of consumers when it comes to issues of media material. Advertiser's sole concern is that the mass media attract consumers and communicate content that is open to consumption. As a result the television networks and other advertising controlled media lean towards producing programs that appeal to advertisers and not as much audiences. A significant point here is not only the ordinary "entertainment" that is offered to audiences, but also what is systematically not communicated, namely, thought-provoking social and political issues. Essentially the mass media are arranged so that consumers are more or less forced to see or hear advertisements. Many ads are endlessly repeated because consumers are not interested and do not pay ample attention to certain ads. That the media are structured to facilitate invasion and reappearance reveals the distorted relationship between customers and advertisers and the ways that the interests of advertisers shapes the form and content of print and transmitted material. This is known as intrusion and repetition and it exposes the power of advertisers as opposed to consumers. ...read more.

and consequently deletes "material association via the production of signs," his ideology states that "political economy and the imperatives of capitalism are not prominent fundamental social forces. " CONCLUSION Though the statement holds a considerable amount of weight, we have to acknowledge that advertising is largely responsible for a critical connection between economics, society, politics, and culture that is at the center of important social issues. The power of advertising is therefore complex: it is a communicator in a "new symbolic environment" which 'moulds' consumption, as well as the form and content of media, politics, perception and behavior. "Consumer capitalism" is unthinkable without its advertising and marketing tools, and advertising really can only be comprehended within the framework of modern free enterprise. Only a "multi-faceted social theory" which merges historical, political, cultural, psychological, economic, and ideological analysis can be capable of providing an important theory of advertising which identifies its social effects from a critical viewpoint that can specify exactly how advertising harms the foundations of social, political, and cultural life. Word count: 1,645 REFERENCING * Golding, P. Murdock, G."Culture, communications, and Political Economy" in J. Curran and M. Gurevitc (eds), Mass Media ad Society, Edward Arnold, London, 1991, pp. 15-32 * Haug, W.F & Baudrilard, J.D, "Continental Perspectives", 'Critique of Commodity Aesthetics: Appearance, Sexuality and Advertising in Capitalist Society''. Frankfurt, GSW press, 1986.pp.23-57 * Tiffen, R. "Lapdog, Watchdog, Wolf: the medias role in scandals", Scandal: Media politics ad corruption in Australia. Sydney: UNSW Press, 1999, pp.206-239 1 ...read more.