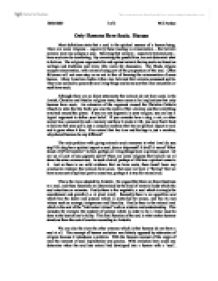 Only Humans Have Souls. DiscussMost definitions state that a soul is the spiritual essence of a human being

Only Humans Have Souls. Discuss Most definitions state that a soul is the spiritual essence of a human being. There are some religions - especially those trusting in reincarnation - that believe animals may also possess a soul. Believing that animals - especially beloved pets - have souls can be comforting. By examining the possibilities, we can determine what to believe. The religions arguments for and against animals having souls are based on writings and traditions and allow little room for discussion. The Hindu religion accepts reincarnation, with animals being part of the progression of the soul. Often followers will not even step on an ant in fear of harming the reincarnation of some human. Many American Indian tribes also believed that animals possessed spirits. They also seemed to personify non-living things and some say that even mountains or such have souls. Although there are no direct statements that animals do not have souls in the Jewish, Christian and Muslim religious texts, there seem to be implications that only humans have souls. An extension of the argument caused the Christian Catholic Church to state that the Earth was also the centre of the Universe and that everything revolved around the planet. ...read more.

Finally there is the rational soul which is the seat of the "intellectual virtues" such as wisdom and understanding. This includes for example the mastery of science which in order to be a virtue must be done to the best of one's ability. This final function of the soul is what makes humans stand out from the rest of creation according to Aristotle. We can also the view the other extreme which is that humans do not have a soul at all. The concept of human evolution was bitterly opposed by advocates of religion because it introduces a problem. With the Genesis account of the origin of man the moment of soul implantation was precise. With evolution how could one determine when the soul-less animal had developed into a human with a 'soul', particularly when the process involved many thousands of years? Most Christian denominations now accept evolution as factual so they have to face defining the stage when 'souls' were first made available. Christians are convinced after much weighing that 'souls' have no weight so there is no body weight loss at death but Christians are not sure where the 'soul' goes. ...read more.

However I think that it is not just humans that have souls, as if souls do exist then animals, indeed all organisms have souls, as a dog is far more rational than a foetus, and yet the foetus is described as having a soul by many who oppose the idea of animals having soul. Thus if we say that a dog has a soul, we can suppose that a cat does, and then a rat, and a caterpillar, and continue further back into the animal kingdom and determine that all organisms indeed have souls. This is further backed up by the view of evolution, as we are part of the animal kingdom having evolved from apes, therefore apes must have souls, as it seems to bizarre to suggest that souls suddenly developed when the first h**o sapiens originated. Therefore we can again say that there should not be a limit to how far back one can trace the idea of a soul, but rather the notion of a soul extends further than humans and deep into the animal kingdom. Consequently by continual regress we can suppose that all organisms have souls of one kind or another, admittedly being severely different. ?? ?? ?? ?? 10/05/2007 1 of 2 Will Forbes ...read more.