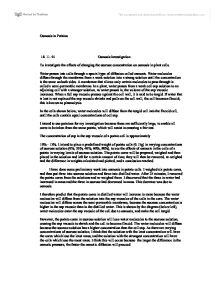 Osmosis in Potatos 18. 11. 01 Osmosis Investigation To investigate the effects of changing the sucrose concentration on osmosis in plant cells. Water passes into cells through a special type of diffusion called osmosis. Water molecules diffuse through the membrane from a weak solution into a strong solution until the concentration is the same on both sides. A membrane that allows only certain molecules to pass through is called a semi-permeable membrane. In a plant, water passes from a weak cell sap solution to an adjoining cell with a stronger solution, as water passes in, the volume of the sap vacuole increases. When a full sap vacuole presses against the cell wall, it is said to be turgid. If water that is lost is not replaced the sap vacuole shrinks and pulls on the cell wall, the cell becomes flaccid; this is known as plasmolysis. In the cells shown below, water molecules will diffuse from the turgid cell into the flaccid cell, until the cells contain equal concentrations of cell sap. I intend to use potatoes for my investigation because these are sufficiently large, to enable all cores to be taken from the same potato, which will assist in ensuring a fair test. The concentration of sap in the sap vacuole of a potato cell is approximately 10% - 15%. ...read more.

There were three of each solution to enable three readings from each level of sucrose concentrationto be made, and therefore an average reading could be calculated. A potato from the Desiree family was taken, a tile was put on the bench and a core remover was used to take fifteen cores from the potato. All cores were taken from the same potato to help ensure a fair test. Safety precautions were put into practise. We used a tile on the bench so that the bench would not be damaged, and were careful not to push the corer into our hands. Boiling tubes were held safely in racks. The cores were then sliced up on a new tile using a scalpel, until they were all approximately the same length and weighed using a top-pan balance to check that they all weighed in the region of 0.65g. The cores were then put into the solutions in the boiling tubes, and a stopwatch was started. The cores were started with two minute intervals between each start time to allow suffiicient time when they were finishing to be weighed and disposed of. If this time had not been allowed, some cores would have had more time in the solutions than others causing an unfair test and a false conclusion. ...read more.

I have several proposals for further experiments to provide additional evidence for my conclusion. I would like to undertake another experiment with sucrose concentrations at 5% intervals from 0% to 100%. I would like to do this as I feel it would provide a better and more reliable set of results and a more justified conclusion. When there are more concentrations the shape of the curve shape can be seen more clearly, I suspect that at the lower concentrations of sucrose the graph falls more steeply, flattening off at higher concentrations. I would also like to conduct an investigation, in conjunction with this experiment, to calculate the concentration of sap within the vacuole. To do this, I would find between which parameters the curve crosses the x-axis of sucrose concentration and retest at every 1% between these two parameters until I have found the concentration which contains a core that neither gains nor loses mass. This osmotic concentration would be the equivalent of the sap in the vacuole. As an extension to this investigation, I would run two experiments in parallel. All cores would be from the same potato, but one would run for an hour, as this one did and for the other the cores would be left in the solutions for longer, perhaps 24 hours, to establish if one hour is the end point of the osmotic diffusion. ...read more.