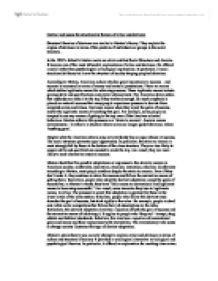 Outline and assess the structionalist themes of crime and deviance Structural theories of deviance are similar to Merton's theory. They

Outline and assess the structionalist themes of crime and deviance Structural theories of deviance are similar to Merton's theory. They explain the origins of deviance in terms of the position of individuals or groups in the social structure. In the 1930's Robert k Merton wrote an article entitled Social Structure and Anomie. It became one of the most influential explanations of crime and deviance. He offered a social rather than psychological or biological explanation. In particular, it was a structionalist theory as it saw the structure of society shaping peoples behaviour. According to Merton, American culture attaches great importance to success - and success is measured in terms of money and material possessions. There are norms which define legitimate means for achieving success. These legitimate means include gaining skills and qualifications and career advancement. The American dream states that anybody can make it to the top if they try hard enough. So much emphasis is placed on material success that many people experience pressure to deviate from accepted norms and values. ...read more.

Innovation, people who adopt the deviant adaptation accept the goals of success but, in Merton's words, they have 'little access to conventional and legitimate means to becoming successful.' As a result, some innovate-they turn to legitimate means, to crime. The pressure to select this adaptation is greatest for those in the lower levels of the class system. Ritualism, people who follow this deviant route abandon the goal of success, but stick rigidly to the rules- for example, people in dead end, white collar occupations that follow their job descriptions to the letter. Retreatism, this deviant adaptation involves a rejection of both the goal of success and the normative means of achieving it. It applies to people who 'drop out'- tramps, drug addicts and habitual drunkards. Rebellion, this involves a rejection of conventional goals and means and their replacement with alternatives. The revolutionary who seeks to change society illustrates this type of deviant adaptation. Merton's strain theory was an early attempt to explain crime and deviance in terms of culture and structure of society. ...read more.

Other members of society may regard such activities as immoral, and strongly disapprove of them. Subcultual theories claim that deviance is the result of individuals conforming to the norms and values of the social group to which they belong. Members of subcultures are not completely different from other members of society: they may speak the same language, wear similar clothes, and attach the same value to family life. However, their subculture is sufficiently different from the culture of society as a whole to lead to them committing acts that are generally regarded as deviant. Often, structural and sub cultural theories are combined, as in Albert Cohen's analysis of delinquency. The development of subcultures is explained in terms of the position of groups and individuals in the social structure. Cohen was the first sociologist to develop a subcultual theory of working class crime and deviance. He examined delinquent gangs in low-income, inner city areas. Delinquency refers to the criminal and anti social acts of young people. Cohen agreed with Merton that the mainstream value of success creates problems for young working class males. Many do badly at school and fail to acquire the skills and qualifications needed for success. ...read more.