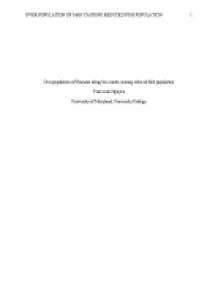 Overpopulation of Humans along the coasts causing reduced fish population

﻿OVER POPULATION OF MAN CAUSING REDUCED FISH POPULATION Overpopulation of Humans along the coasts causing reduced fish population Tuan Anh Nguyen University of Maryland, University College Man gets into conflict with his ecosystem every quite often. One factor that is for sure is that every action that man undertakes impacts either positively or negatively in one way or another on the ecosystem. Ecosystem in biological terms is referred to as the kind of the environment habited by a living thing. Man, or humans, can virtually live anywhere apart from underwater (Bradley, 2009). Man believes in being supreme over every other animal and that explains why as other animals adapt to their environments, man forces its environment to adapt to his specifications. In the history of man, it has been known that he lived in practically any type of environment. There are those who lived in the wet lands; all they did was to reclaim the land thereby making them habitable. On the other hand, there are those who lived in the deserts; here too, they tried to make them a bit habitable. Man has even lived in the snow in the polar regions and just was the case with the men who lived in the other regions, here too, man tried making it more habitable (Joel, 2004). ...read more.

This claim of ownership gives him authority over all other animals and plants that live in the land. He is thus free to do with them as he so please even if it means cutting don the trees and killing the animals. The most basic food eaten by man in the history of man is fish, these are small aqua animals that are very rich in protein. This thus made them bearers of great portions of man?s implications on the environment. Fish replicates very fast, within five months, a fish is fully-grown and lays eggs, despite this rapid population growth, the fish in the terrestrial regions could not withstand the demand pressure that man laid on them (Thomas & Michael, 2001). The rate of increase of human?s population was alarming furthermore in the terrestrial regions, the commonly existing water bodies that were thus homes to fish were either small free standing lakes or rivers. This resulted in small amounts of fish that could barely sustain the high demand (Webster, 2008). After realizing that some regions produced some products while others did not, man invented trade that defined as the exchange of goods and services. This development geared towards ensuring that there was no lack of any type of basic product in any corner of the world. ...read more.

This would definitely affect the aqua population key among which is fish that they depended on for commerce (Druskat &Pescosolido, 1998). Wars are fought by able bodied men who could otherwise be fishing and conducting trade, furthermore war disrupted peace that fostered economic viability. At times of wars men had no food as all of the resulting tension can not make one engages himself in economic activities. This factor leads to shortages of economic activities in times of war. Interactions get greatly reduced as the animosity thrives. Those who once produced goods and sold them freely to their neighbors now turned foes do not do so anymore and the regions face acute shortages of the goods and services. This is secondary shortage caused by man, which coincidentally provides a break to the aqua population giving them time to multiply their population and thus withstand the demand. At such times, the economy of the regions virtually comes to a stand still as there is no economic activity that people engages in. in a nut shell, humans cause most of the problems they eventually face in life. For every action, there is a reaction or as other wise stated cause results in an effect. These sayings are invention of men who at times of wars and conflict seem to fail to understand the logic behind the statements. They thus cause themselves problems and fall victims of the very problems (Aaker & Aaker, 2010). ...read more.