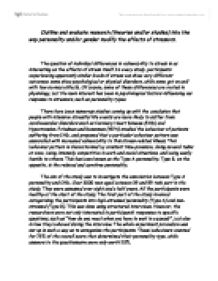 Outline and evaluate research (theories and/or studies) into the way personality and/or gender modify the effects of stressors. The question of individual differences in vulnerability to stress is as interesting as the effects of stress itself. In every study, participants experiencing apparently similar levels of stress can show very different outcomes: some show psychological or physical disorders, while some get on well with few obvious effects. Of course, some of these differences are rooted in physiology, but the main interest has been in psychological factors influencing our response to stressors, such as personality types. There have been numerous studies coming up with the conclusion that people with intensive stressful life events are more likely to suffer from cardiovascular disorders such as Coronary Heart Disease (CHD) and Hypertension. Friedman and Rosenman (1974) studied the behaviour of patients suffering from CHD, and proposed that a particular behaviour pattern was associated with increased vulnerability to this stress-related illness. ...read more.

These behaviours counted for 75% of the overall score that determined their personality type, while answers to the questionnaire were only worth 25%. Nearly twice of the Type A participants developed CHD during the duration of the study. When physiological measures were assessed they were found to have significantly higher levels of adrenaline, noradrenaline and cholesterol. Friedman and Rosenman then concluded that there is a close relationship between Type A personality and CHD, which led to another conclusion that there is also a close relationship between Type A behaviour and the likelihood of suffering from stress. One of the strengths of this research study is the large number of participants. In addition, the study was assessed over a period of eight and a half years, making it a longitudinal study. However, there were a number of problems with the study. The researchers used the correlation method, with which we cannot assume a causal relationship by saying "Type A personality has caused CHD". ...read more.

He suggested that competitiveness may lead to other characteristics such as impatience and hostility. Since the original work, many studies have looked at the relationship between type A behaviour and CHD. Some of these were retrospective and some prospective. Significant correlations have been found, but these were never very high, and many negative findings have been reported. Even the value of the Type A concept has been questioned (Evans 1990). Further work in this field has suggested that Type A personality has a number of less obvious underlying traits. Type A people are often over-controlling and possess a strong sense of duty (Totman 1990). They are high achievers and so must be very committed. Therefore they would reasonably be expected to show high levels of commitment and control. Despite the fact that Type A behaviour seems to be a risk for stress-related illness, many Type A individuals live quite happily with their pressured and competitive lives. So, along with factors that make them vulnerable to stress, Type A personalilty may also score highly on protective factors such as commitment and control. ...read more.