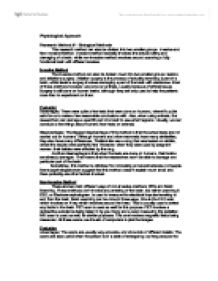 Physiological Approach Research Method #1: Biological Methods This research method can also be divided into two smaller groups: Invasive and Non-Invasive Method. Invasive method basically involves the actual cutting and damaging of a brain, while non-invasive method revolves around scanning a fully functional brain with different devices. Invasive Method The invasive method can also be broken down into two smaller groups: lesions and ablations surgery. Ablation surgery is the process of actually removing a part of a brain, whilst lesions surgery involves damaging a part of the brain with electrodes. Most of these methods however, are done on animals, usually because of ethical issues. Surgery is still done on human brains, although they are only used to help the patients more than to experiment on them. Evaluation Advantages: There were quite a few tests that were done on humans, where it's quite safe for us to make a few reasonable conclusions with. Also, when using animals, the researchers can damage a specific part of a brain to see what happens. ...read more.

MRI scan is used as well, for similar purposes. This one involves magnetic fields being measured. All these scans use the aid of computers to plot the images. Evaluation Advantages: The scans are usually very accurate, and show lots of different details. The scans are also useful when the person is in a state of emergency, as they produce the images almost immediately. Also, the results are usually replicable, which makes it hard to depict. Disadvantages: The biggest problem with these scanners is that they are too expensive currently. The scanners are usually used for people who need help, more than research purposes because of this. Research Method #2: Genetic Influences on individual differences This method can also be divided into two smaller sections, but they are both based around the study of twins. Correlational techniques and twin studies Correlational technique is the observation of how different variables have affects on people. ...read more.

There may also be some subjectivity from the researcher. Research Method #2: Experimentations Basically put, this method is when people take an idea, test it, and see if their idea was right. The experiments vary vastly, and the subjects of the experiments vary too. The experimentations can be reproduced by anyone, as they are very structured and well controlled. Evaluation Advantages: Because these experiments and results can be reproduced by anyone, the results are reliable. The strict controls allow the psychologists to see what affects people in different ways. Also, animal testing allows the researcher to do certain tests on animals that maybe deemed as unethical to be done to people. These experiments told us a lot about people too, as we are animals biologically. Disadvantages: However, some people view experiments on animals as unethical as experiments done on people. There are also lots of differences between us and animals, which disallows direct comparison. Also, although controlled may give us reliable results, it may not necessarily be accurate. They are usually things which people won't do in real life, and thus, the experiments lack ecological validity. ...read more.